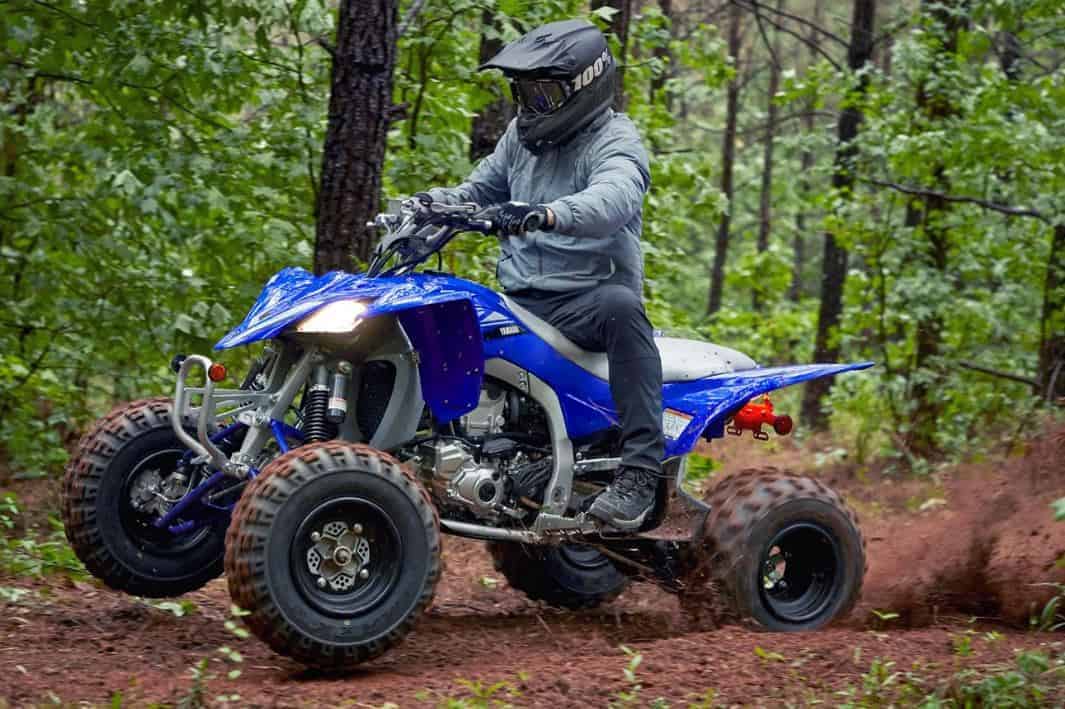 When you try to start your ATV and you hear a click instead of the engine roaring to life, it’s more than annoying. Instead of joining your friends as they go mudding, you now need to figure out how to make your quad start. So, what can you do when your ATV doesn’t start?

Your ATV most likely clicks when you try to start it because of the battery. The reasons for this are numerous, from loose connections to a current draw that drains the battery. If the battery is not the cause, the ATV probably has a faulty starter solenoid.

Your ATV is meant to be ridden, not sitting in the driveway, so let’s get to troubleshooting.

Connections to the Battery Are Loose

If the connections are clean and tight, then it’s time to move on to the next possible problem.

The Battery Needs To Be Charged or Replaced

Battery problems are the number one reason ATV owners hear the dreaded click when trying to start their quads. ATVs give batteries a workout, so it’s not uncommon for one to go bad after a couple of years.

Your climate, how well you maintain it, and the quality of the battery affect its longevity. If you bought a cheap battery, do not expect it to last for more than a year or two.

One sign that the battery doesn’t have enough of a charge is multiple clicks in rapid succession. If there is a single click, then you may have another problem with your ATV—the starter solenoid. We will talk about that in a bit. For now, we’ll assume the battery is the issue.

Here are a few reasons this could be happening:

Your Battery Is Old

To test for this, unplug the battery and charge it completely. Then measure the voltage using a multimeter. Let the battery sit unused for a day or two and recheck the voltage. Significant loss of voltage means you most likely it is time to replace your battery.

Before you go out and buy a new one, you might want to do some additional troubleshooting. Check out, How To Keep an ATV Battery Lasting for more info.

Using Too Much Electricity When Riding

Let’s say you charged up your battery. After riding for a couple of hours, you stopped. When you tried to start your ATV, you heard the click (or silence).

If your battery can’t hold enough of a charge, then you should do a load test. For this, you need a multimeter and a load-tester if you want the most accurate results.

First, charge your battery to at least 75% (typically 12.4 volts). Use a multimeter to check the levels.

Reconnect your battery. Try to start your quad and check the battery’s voltage. A number below 9.6 volts means your battery doesn’t hold a charge.

Perhaps you made sure your battery was charged in the evening, but it is dead the next morning. Something in your ATV is using current. Parasitic amperage draw is the term for when a vehicle’s component is drawing electricity when it shouldn’t (i.e., the engine is off.) Typically this is due to a bad relay or fuse.

The Fluid Levels Are Low

This used to be a more common problem when most ATVs had lead-acid batteries. If your quad has one of those batteries, then a fluid check is required. However, most ATVs come with an AGM (absorbed glass mat) or SLA (sealed lead-acid) battery, which cannot be topped off.

If you need to check fluid levels, clean the outside of the battery first to keep crud and dirt from falling into the battery.

Open the covers and check for the fluid levels then fill the battery cells so that the plates are covered and replace the cover.

Charge the battery and see if it can hold its charge. If not, buy a new one. And when you do, buy a higher quality AGM or SLA.

Another problem with lead-acid batteries is they suffer from poor performance in cold weather. Since you can’t do much about the weather, once your lead acid battery no longer performs well, you have to replace it.

Here’s a helpful video showing how to test an ATV electrical system:

Have you left your four-wheeler sitting idle too long? Cars use an alternator that charges the battery while it is running. But most ATVs use a stator, which is designed to provide electric power.

Unlike alternators, stators do not recharge the battery. This is why a four wheeler’s battery needs to be charged while a car’s does not.

So if you forgot to charge the battery, it might have a little juice left, but not enough to start your vehicle.

If you haven’t already invested in a jump box, like the NOCO Boost Plus (link to Amazon) this is a good time to do so. Jump boxes are designed to connect safely to 12-volt batteries. The USB ports are handy for charging phones and other devices as well.

How To Charge an ATV Battery will walk through all the steps to keep your battery charged and lasting a long time.

I like to use the Ctek Smart Charger found here on Amazon if the ATV is going to be sitting for more than a couple weeks. That way the battery is good to go when I need it.

The Starter Solenoid Has Gone Bad

A solenoid provides the contact point between the battery and the starter. It works like this: when the starter switch is activated, amperage is sent to the solenoid. The amps cause the armature inside the solenoid to move, which completes the starter and battery circuit.

When you try to start your ATV and hear a single click, chances are good your starter relay is the problem. But there are a few other signs that the solenoid is the cause of the clicking.

You will have to replace it. The starter solenoid will have two wires going from the battery and a pair of smaller cables going to the fuse housing. Before taking it off, make sure the battery is not hooked up. Otherwise, you are risking getting shocked.

The number one reason an ATV clicks and doesn’t start is the battery, so you should troubleshoot that first. If your battery is functioning correctly, the next common source is the starter solenoid or a bad starter motor. Occasionally you could have hydro-locked your engine, or the fuses have failed.

The good news is that isolating battery problems is usually straightforward and replacing them is easy. The hard part will be parting with your hard-earned cash.