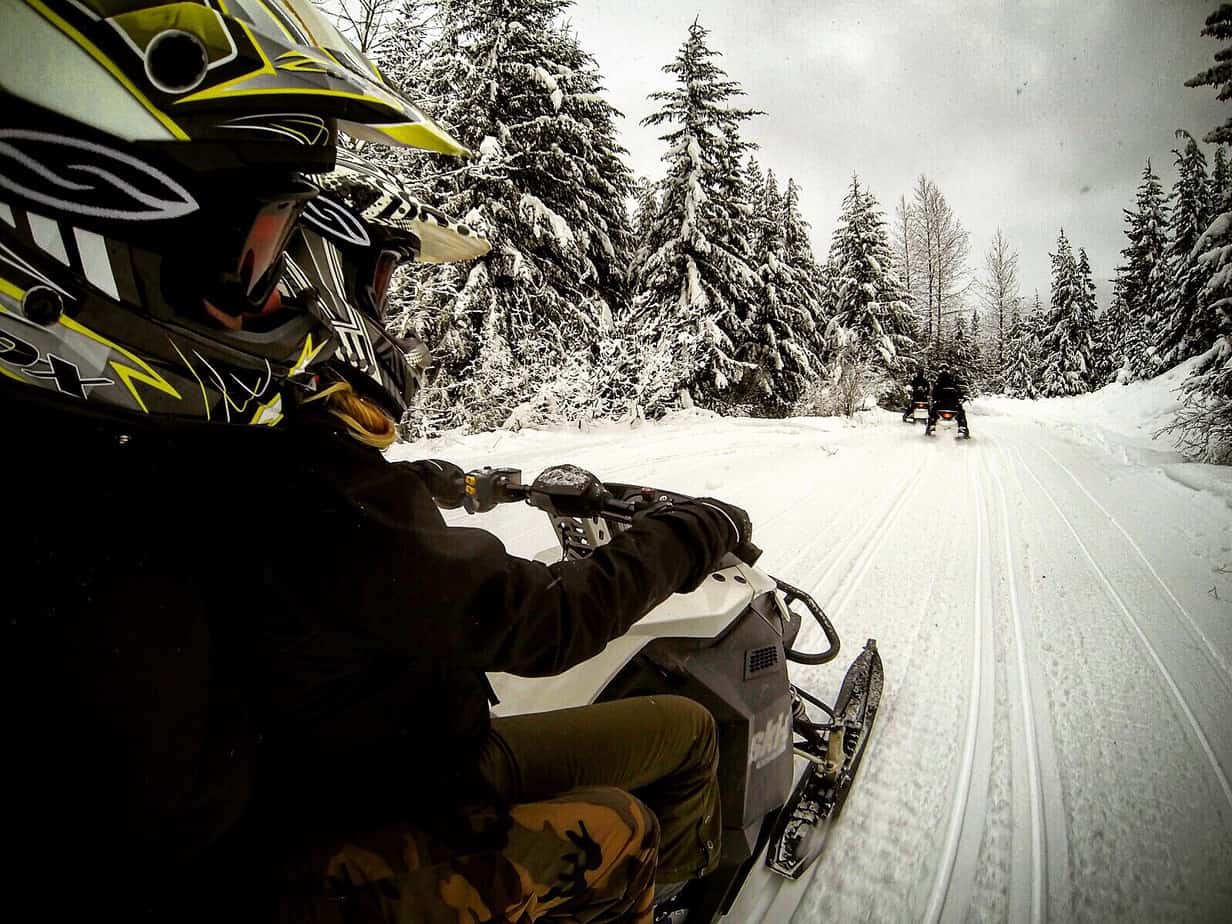 Snowmobiling is one of the most popular winter recreational sports and its popularity is steadily increasing every year. The combination of fast adrenaline and a wonderful winter landscape can certainly be appealing, but people often wonder whether snowmobile is safe. There are different reports out there, which is why we are going to examine this topic for you.

Although snowmobiling is not a completely high-risk activity, it is one of the most dangerous outdoor recreational activities. However, snowmobiling is shown to be safer when safety precautions are followed. Most snowmobiling injuries can be prevented with proper safety guidelines.

The question of safety can be raised with any sport or activity, be it tennis or some extreme sport like snowboarding. Snowmobiling certainly fits into the category as there are several quite obvious risk factors associated with it.

First of all, you’re driving in very harsh conditions on a terrain that is covered in snow, potentially hiding a dangerous obstacle or something of the sort. Then you have the speed, which is usually a very important factor in snowmobiling and we all know that speed can cause serious accidents and injuries in sports, especially vehicle-based sports.

Last, but not least, is the fact that you’re riding a high-powered vehicle, which is in itself a potentially dangerous thing.

But is it really unsafe? Lots of other sports have the same hazards and are not considered unsafe. Also, snowmobiling is not considered to be an extreme sport, which means that the sporting community doesn’t think it’s that dangerous.

Still, despite all the safety precautions, snowmobiles regularly appear in the accidents sections of newspapers and portals around the world and more often than other recreational riders.

The number of severe injuries and fatal accidents while snowmobiling is counted every season, despite all the available safety protocols and guidelines. The problem is that these numbers are higher than in other similar sports throughout the year.

So, what can we conclude from all of this? Snowmobiling definitely is one of the more dangerous recreational and sports activities, based on the facts and available numbers. Still, despite all of that, it is not treated as an extreme sport and is – generally at least – not perceived as being that dangerous.

How To Make Snowmobiling Safer

In order to reduce the risk of injuries and accidents, the International Snowmobile Manufacturers Association (ISMA) regularly issues safety guidelines that help prevent harm while enjoying your ride.

Here, we are going to bring you a list of the most important tips:

A lot of places require either a license or a safety course certificate before allowing you to ride a snowmobile, but even if it isn’t obligatory, you should always take at least a brief safety course to prevent injuries and gain a better insight into the activity itself.

2. Check the weather and the trails

This is very important, as harsh weather conditions could make your ride more difficult, which means that the risk of injury would be increased. The same goes for trails – you should carefully analyze known trails in order to avoid untested and risky roads.

This is also a prerequisite in most places, as you won’t be allowed to drive the snowmobile without the proper equipment. You’ll be informed on what you actually need, so just listen carefully and you’re going to be good to go.

While you might not be a licensed mechanic, there are certainly a lot of things you can notice by just looking. If you notice anything out of hand on your snowmobile, alert someone who’s in charge and don’t drive it, because you might be risking your life.

This is always good, especially if you bring someone who has experience. Namely, in case anything happens, you’ll have someone to help you or call for help, which you yourself might not be able to do if you encounter a problem while riding in the snow.

6. Equip yourself with first aid

You should always carry a basic first aid kit with you, just in case you need it. Although nothing probably will happen, you don’t actually know whether you’ll encounter a problem along the way, so it’s better to be safe than sorry. The same applies to a repair kit and an emergency kit.

Don’t be a senseless driver! Always look around you and stay alert, because you might encounter something unexpected along the way. That is why it’s important to stay keen, as you might need to react quickly in certain situations.

The biggest concern here is other riders, especially on popular trails.

There are moments where you can and need to add a little speed to your snowmobile, but don’t be reckless and just accelerate without any reason whatsoever. You’re endangering yourself and others if you potentially lose control over your vehicle.

However, fun this might seem to you, it’s a big no-no! Frozen rivers are dangerous and you never know how thick the ice actually is. If you break the ice and fall into the river, you’re going to be in a potentially fatal problem.

10. Do not overload your snowmobile

This is also important for better control of the snowmobile. Due to gravity and other forces playing an important role in the riding process, you’ll have to avoid any unnecessary luggage as they might cause problems with controlling the vehicle.

Snowmobiles aren’t designed for towing people around; there are special vehicles just for that. That is why you should not pull anyone behind you, as that could endanger both you and them.

We used to pull each other around on snow tubes with our machines when we were little. But, it does increase the chances of an accident or injury.

Just like with regular cars and motorcycles in the town, you should not drive a snowmobile drunk or under the influence of drugs. You have to be completely aware and in control of what you’re doing, which is why you also have to be sober.

This is a very important thing if you don’t want to encounter an unexpected problem. The trails are there and are marked for a reason; respect that. On private property, it can be fun to explore a bit. But be aware, not knowing the terrain you’re riding can be dangerous.

A license can usually be obtained (in the US) when you turn 16, which coincides with the laws on acquiring a driver’s license. Children under 16 shouldn’t be allowed to ride a snowmobile by themselves. Also, in many states, it’s illegal outside of private property.

I can’t count how many times we broke this rule as kids. But we were always on private property with adult supervision.

This only applies to children under the age of six, as they are still not strong enough to effectively hold onto you while driving, which means that they could fall off the vehicle and get badly injured.

There are a lot of possible locations for snowmobiling around the world, but in order to get the most out of your experience, you’re going to want to pick the best location. Here is a list of the best snowmobiling locations in the United States:

Here is our state by state list of Popular Trails or riding areas. Some of these are only for ATVs or dirtbikes and close in the winter.

How Many People Die From Snowmobiles?

Now that we’ve gone through everything, let us see some of the numbers. And while the injury and fatality rates for snowmobiles aren’t unbelievably high, they’re still among the highest in the branch.

For example, the Canadian Institute for Health Information has recorded a total of 137 snowmobiling accidents with severe to fatal injuries for the 2000/2001 season.

This was the second-highest number of such injuries, behind the ones in cycling (159), which means that snowmobiling went down in the books as the second most fatal recreational activity for that year in Canada.

We managed to find a recent example also – as of March 2020, 19 people have died during snowmobiling in the state of Wisconsin, with the numbers being somewhere between 10 and 20 over the past 10 years (with the record being 2014’s 23 deaths). (source)

We also managed to find a study that shows that there was a total of 57 snowmobiling-related deaths in Sweden from 2006 to 2012, which was more than ATV-related deaths during the same period.

And that covers out the topic of the day. We have extensively analyzed the issue of safety in snowmobiling, giving you valuable advice and information on how to increase your safety and avoid potential injuries. Snowmobiling is definitely not easy and you should approach it with adequate seriousness in order to get the best out of it. See you next time!