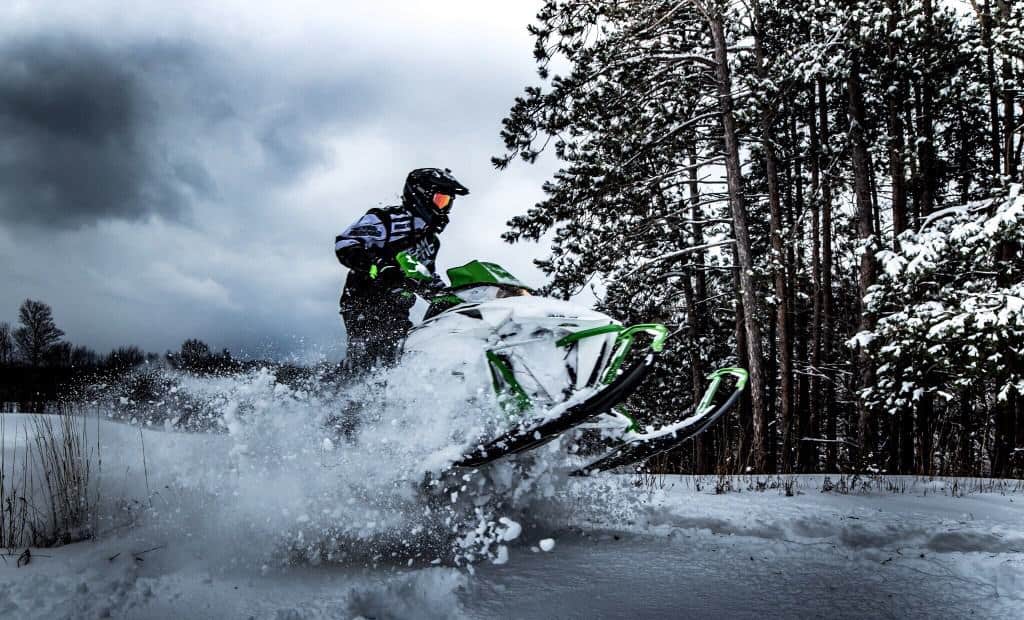 Whether you’re a professional or just a recreational driver, snowmobiles can be extremely fun and entertaining. A very popular winter pastime, snowmobiles are a growing market and several brands try to improve their products in order to be the best on the market each year.

One of the aspects that buyers certainly look out for is the speed of a snowmobile, since that aspect really does matter when you want to enjoy the winter landscape by riding through it.

Based on that fact, we have decided to bring you a list of the 10 fastest snowmobiles on the market so that you know which one to pick if you’re keen on buying or renting one. So, keep reading to find out more!

The speed of a snowmobile depends on the power of the engine. Earlier models, which were not produced for sporting or recreational purposes, usually couldn’t even reach 62 mph, but newer brands and models – which are more and more used in sports and recreation – usually reach up to 150 mph, with some models being able to gas fast as 200 mph.

We start our list with the model that has been declared the snowmobile of the year for 1998. Certainly, it is a very old model, but we had to include it on our list because it still is one of the fastest snowmobiles when compared to some newer models.

It was a real beast in 1998 and although the model has been discontinued since, it deserves a place on our list. Back in 1998, the model was considered to be a top-notch product and a historical landmark that would enable the snowmobile industry to take a big step forward in its development.

Although not the fastest model out there, the MXZ 600 has been one of the most reliable and durable models for Ski-Doo. It has been produced for years, with some changes having been made each year. The MXZ 600 is a great model for recreational drivers, as it offers a great combination of practicality, reliability and speed, for those who prefer faster models.

This 1997 model was, like the first on our list, also a big breakthrough when it comes to speed. Polaris produced its XC 600 series as a default triple model, but there were also some double models on the market back then.

It was a very reliable product that attracted a lot of satisfied customers, especially those who liked to ride fast.

Although there have been anecdotal reports of the XC 600 going as fast as 120 mph, the official stock speed is listed at 102 mph, which is still incredibly fast, especially for a 1997 model. The only downside of this model was that it ate up a lot of gasoline.

The Switchback Pro-S series by Polaris is still one of the most durable series from the famous brand. Although the models have changed, the Pro-S 800 model has been present for years, until its discontinuation in 2019, when it was replaced by the slightly stronger Pro-S 850 model.

This was a very reliable snowmobile that offered a solid performance when speed is concerned, but it was also a great model for recreational users since it combined the practical reliability of non-sports models with solid speed performances.

Not to mention how mean this machine looks!

The RMK 700 came after the revolutionary ZR600 that changed a lot back in 1998. It was a good and solid model, although it has been discontinued with time, due to being more than a couple of decades old.

The Polaris RMK 700 could go as fast as 106 mph, which wasn’t that much of improvement back then, but it was still a fast-enough model that could satisfy the needs of speed-lovers.

I remember tearing it up on one of these when I was younger, a great machine.

Ski-Doo’s 2003 model was a very good product and one of the strongest models back in the day. It was very reliable, it had a solid engine that was very strong and it did well on all the tests.

Although the stock speed wasn’t that exceptional compared to some earlier models, it was still more than enough for that time period, which is why the MXZ REV Sport 600 HO is still a product people remember with nostalgia, as it has been discontinued in the meantime.

One of the fastest snow machines of the 2000s, the MXZ high output.

Although this model has been active for a while now, we are listing you the newest model for the 2021 season. The Polaris Assault 800 has been produced for a while as one of the most recognizable and reliable models under the Polaris brand.

If you look around their archive, you’ll find a version of the model for every production year. It is a stylish piece that has been constantly getting positive reviews.

It has a variety of cool features and it is a great model for lovers of speed, as it can go as fast as 112 mph, which is a solid number for recreational drivers.

This model was considered to be a top brand when it came out and has been constantly given the best scores by the users themselves. It was a very reliable model that excelled in its performance and quality, and although it did cost a lot, it was a good deal when everything else is take into account.

Its stock speed was registered at 118 mph, which was a solid number for recreational users not so long ago.

Similarly to the Polaris Assault 800, this product has also been consistent for Ski-Doo and has been produced for years now. It is a very reliable model that offers a lot to the recreational driver as it allows for the adrenaline to kick in when it reaches its 128 mph stock speed limit

This is very close to the general limit of 150 mph, which means that this is a very good product when speed is concerned.

Although this is not a recreational model and is basically a custom-made race model, we had to put it on our list because back in 2008, this model broke the world record for fastest snowmobile, when it recorded a speed of 210 mph (almost 340 km/h), which was a truly incredible feat lauded in the world of snowmobile racing.

This is a model you cannot buy, since it was specifically designed for racing for the G-Force One team, but it deserves a spot on our list due to the incredible feat that it managed to achieve not so long ago.

This concludes our list. We have given you a historical overview of the fastest models based on their stock speed, and their measured speed.

So we hope that now, you have a clear picture on how the speed limit evolved throughout the years and which models excelled in different periods of time. See you next time!