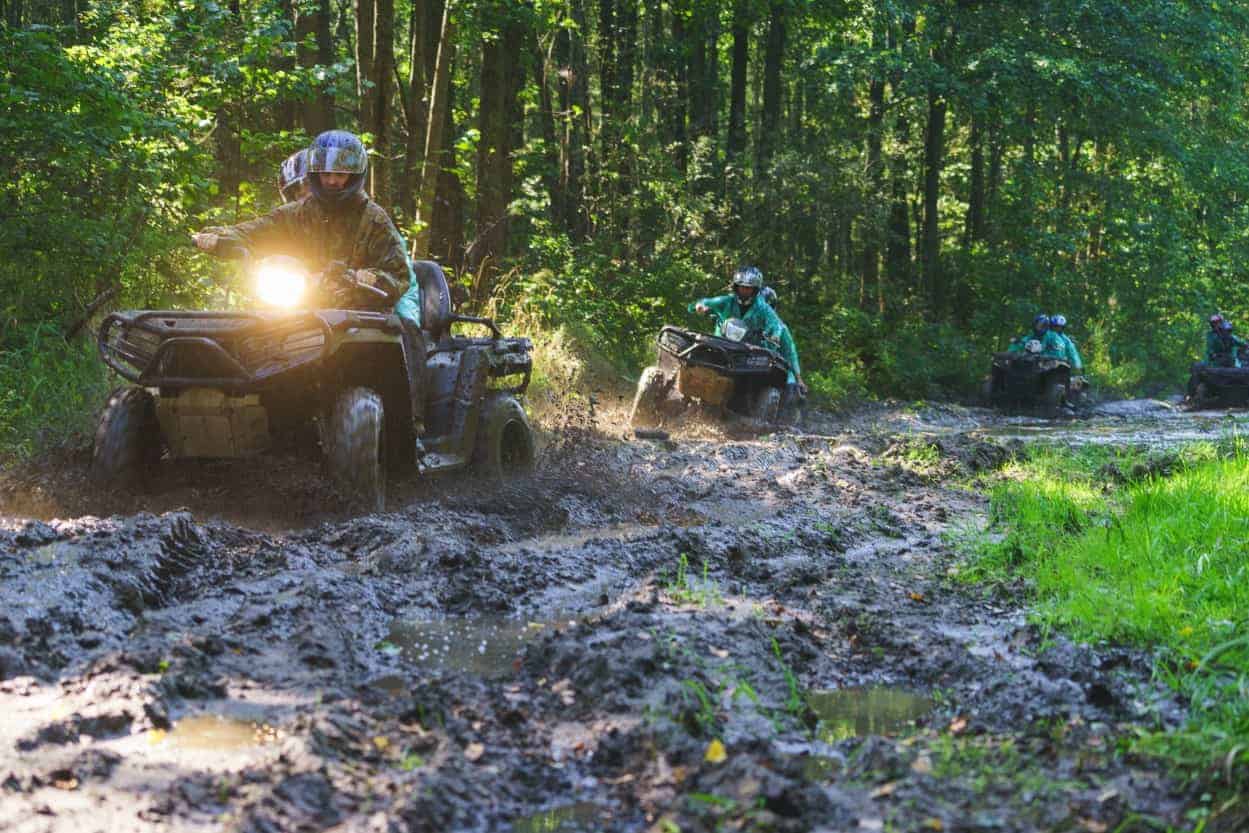 Summer is finally here, so you and your buddies decide to take your ATVs out for the first ride of the season. You have waited with anticipation all year for this day. Then, all of a sudden, you attempt to turn on your ATV and find out that the battery has died. What now?

Some ATVs are able to run with a dead battery, though it is not recommended to drive without a battery or with a dead one. If your ATV has a pull start, the mechanical functions of the engine as well as the stator will permit continued ATV use. When the ATV relies on electricity to start, the ATV will not likely run.

Some say that they are able to keep their ATVs running- and at a pretty standard force- with or without a battery. Perhaps this sounds tempting to neglect to replace the battery at all. After all, this could save you a little bit of money, right?

How ATVs Can Run with a Dead Battery?

If you are confused about how an ATV can run with a dead battery, then you are not alone. After all, just about everything else that requires a battery will cease to function once the battery has died- cars and other vehicles included. So, what makes ATVs so special?

ATVs can run on a dead battery when their engine and starting system are mechanical rather than electrical. When an ATV has a pull start, the engine can function without the electricity supplied by a battery. This will allow a “bump” start to restart the engine. Additionally, ATVs with carburetors can generally work without electricity.

Carburetors in ATVs do not require the electricity that modern fuel injection systems require from a battery.

With this, older models of ATVs have a higher likelihood of operating on a dead battery. That, and the fact that most modern ATVs have a significantly higher number of electronic functions that require the use of a battery.

Many ATVs have a push start option that uses a battery to power the engine on. This is what will allow the ATV to be driven, so a dead battery will have to be jump started or replaced if this is the case. However, for ATVs that can be driven with dead batteries, there are alternative options available.

Is it Bad to Drive an ATV with a Dead Battery?

Let’s say that you are in a fortunate situation where your ATV can be steadily driven with a dead battery. The mechanical aspects are all working, and you do not need the electricity that the battery supplies for lights or electronic fuel injection systems. In this case, you might be wondering why you even need to replace your dead battery.

Driving an ATV with a dead battery (or taking the battery out entirely) can be hazardous to the vehicle.

Though driving with a dead battery can sometimes be accomplished due to the mechanical components of the ATV powering the vehicle’s engine, long-term use can damage the vehicle. Be sure to recharge or replace the battery as soon as possible.

Some people assume that if their battery is dead and the ATV is functioning without it that they can simply avoid replacing it in the first place. But, if you are to take out the dead battery and leave its slot empty, then you are creating a gap in the circuit that is meant to be closed.

This can lead to an electrical output that has “nowhere” to go (as it was intended for the battery) which will lead to the frying of your ATVs engine and other electrical components.

Not only is this going to cause long-term damage to your vehicle, but you could become injured in an accidental electrical issue. Additionally, the cost of replacing the battery is not going to be nearly as high as it will be to replace the components that are fried when you try to drive your ATV without a battery at all.

In this case, it is obviously way easier and more practical and appropriate to recharge or replace the ATV’s battery. There are plenty of options for restarting your ATV’s battery if it dies, testing it to ensure that the battery is the faulty component, and replacing the battery if need be.

Check out our How To Charge An ATV Battery article to get a more in-depth step by step guide.

How to Start an ATV with a Dead Battery?

Though you will not want to drive your ATV with a dead battery for long, you might need to drive it in order to get home or take your vehicle into the nearest shop. There, you will be able to replace or recharge the battery depending on the scenario that you are in.

We go into a lot more detail on each of these options in our How To Jump Start an ATV Battery article.

If you choose to jumpstart your ATV with jumper cables, you can choose between connecting it to another ATV’s battery or to another car battery as long as the car’s engine is turned off. When choosing to connect to an ATV battery, you should not have any issues. You can follow the same guidelines that you would follow to jump a car’s battery with another car.

However, if you are attempting to jump your dead ATV’s battery by connecting to a car’s battery with jumper cables, it is essential that the car is turned off.

Leaving the engine off, the car’s battery should still have enough power to supply the dead ATV enough to jumpstart. In this case, you will follow the similar steps as jumpstarting a car with another car’s battery, you will simply leave the car’s engine off when connected to the ATV’s battery.

We like to bring a Portable Jump Pack (link to Amazon) for whenever a battery dies. That way we can at least get the ATV somewhere safe.

Another alternative to jumpstarting your ATV is to use a “bump” or compression start method. In this case, you are relying on the engine starting once the ATV is in motion, the engine firing, and the stator resuming its hold on the charge.

To bump start your ATV, you will have to push the ATV to get the tires to turn the engine so that the spark plugs fire appropriately. If you are attempting to do this, you should know that you will need to get the ATV to a speed of at least 3mph if not 5mph, and you will need to be able to jump on the ATV immediately once it fires.

If you have a clutch you can push the ATV in neutral, and once you’re up to speed, pop it into gear and the engine should turn over.

In this case, you will likely be pushing the ATV from behind (perhaps with the help of a buddy), and you should try not to stop driving until you reach your destination as you may find that you have to repeat the process on an ATV with a dead battery.

It is suggested to use a downward inclined hill, when possible, to bump start your ATV as the momentum will help you to push the vehicle more easily.

The other option that you have to start your ATV with a dead battery is to charge the battery. This might be easier said than done as you could find yourself as a sitting duck in the middle of the woods if your ATV relies on electrical components hooked up from the battery in order to run.

But, if you are able to get your ATV to a location that you can charge it, then this is probably going to be the easiest option (and one that likely makes logical sense). With that said, it is good to test to make sure that the battery is the problem in the first place.

We use this CTEK Smart Charger (link to Amazon) to keep our batteries topped off when not in use.

Once you have attempted to charge your dead ATV battery, it is recommended that you test the battery to make sure that it is able to work and hold a charge. You can do this by testing the battery with a multimeter. In this case, you will need to review the user manual for your ATV model to know how much power the battery should be putting out.

Then, if your battery is not reaching this, you will know that you might need to replace your battery. To replace the battery, it is recommended that you write down the make and model of your vehicle and then take in the old battery.

Some locations offer a discount (for the battery core) or will at least properly dispose of the old battery for you.

Even if your ATV is driving with a dead battery, it is better to take your car or another vehicle to the store to replace the dead battery when possible. You do not want to risk using your ATV- even if it seems to temporarily be driving ok with a dead battery. This could put you in a risky and potentially dangerous (and if nothing else, frustrating) situation.

How Long Does it Take to Charge a Dead ATV Battery?

Charging a dead ATV battery is an essential component to ensuring a quality and enjoyable ride with your buddies. But, you might grow impatient waiting on your battery to charge if you forgot to charge it the day before.

ATV batteries take between 3-10 hours to fully charge depending on the ATV model, power needed, and quality of the ATV battery charger. Charging the battery for a 200cc ATV will look entirely different than charging a larger model. A new ATV battery should last up to 5 years and will need to be charged regularly.