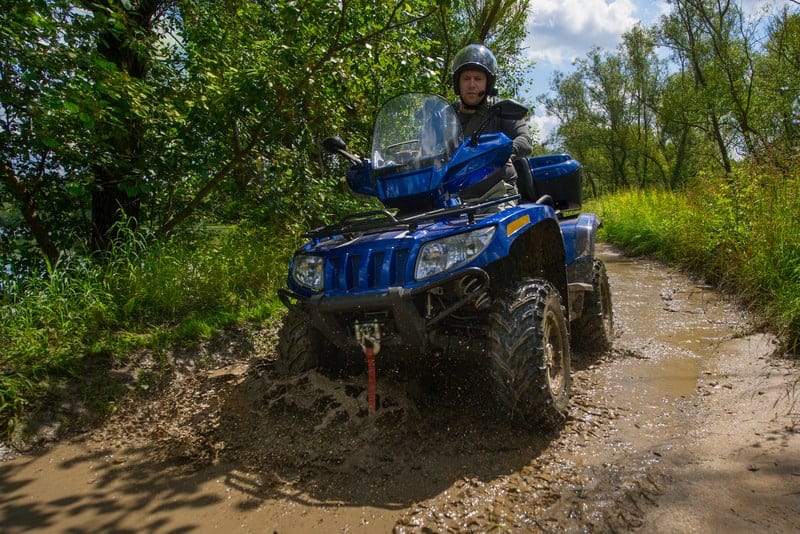 An all-terrain vehicle (ATV) is defined by the American National Standards Institute (ANSI) as being a “vehicle that travels on low-pressure tires, with a seat that is straddled by the operator, along with handlebars for steering control”. It is likewise known as a four-wheeler or a quadricycle (quad). ATVs can be very practical, but they are also very expensive, and we are going to tell you why that is in the paragraphs that follow.

In today’s article, we are going to talk about the price of ATVs. After a brief introduction, we are going to tell you why they are so expensive, is the price worth it, and whether you should get a new ATV or a used one. So, if you want to find out more, keep reading!

What makes ATVs so expensive?

ATVs are a pretty expensive hobby. The prices aren’t always balanced – it depends on where you live, the brand, the model, etc. – but you can find some from half a dozen thousand dollars to more than $10,000, depending on what you’re looking for. Pretty expensive for a fancy motorbike, eh? Well, there are several reasons for that and we are going to list them here.

Firstly, ATVs are still considered to be utility vehicles, rather than actual vehicles.

Surely, they are used for recreational and sports purposes more often than before, but the majority still perceives them as tools that can be used in agriculture (lodging fertilizer, carrying tools for working in the field, etc.) or other areas of everyday living (plowing snow, for example).

Why is this relevant? Well, since they are perceived as utility use, they automatically don’t have such a large market, meaning that in order to gain profit from these products, the companies that produce them have to make them expensive. Otherwise, it wouldn’t make sense for them to produce them. You know that tractors and combine harvesters are likewise expensive – and for the same reasons.

The second reason is that their production really does cost more. Namely, ATVs are designed to be more adaptable to different kinds of terrain than “classical” vehicles, such as cars and motorbikes. This means that they have to have stronger parts, and stronger parts cost more money.

So, the production really does cost more and since companies are always profit-orientated, it’s logical that they are going to sell their ATVs at higher prices.

Lastly, the prices are so high because people are willing to pay so much for an ATV. Namely, the market determines a large chunk of the prices of different products, so why should ATVs be an exception? This is mostly valid for the U.S. market, but it can also be applied to other parts of the world.

The price markup in the United States is like that, and as long as people are ready to pay ten or eleven thousand dollars for one ATV, the prices won’t change.

These are the main reasons for the high prices of ATVs. Let us see if they hold their value over time.

Do ATVs hold their value?

As far as holding their value, ATVs are a very safe bet for you. The worst thing that can happen to you when selling is that you get too little of the original value of the product you are selling – a nightmare!

Imagine buying a product for, let’s say, $9,000. You use it, you keep it in good condition, you maintain it regularly and after three years of not overusing it, you decide to sell it for some reason.

And then you find out that you cannot get more than, let’s say – $4,000 for a relatively good and new product. This does tend to happen with a lot of products, but luckily for you – ATVs aren’t among them.

The value of ATVs doesn’t depreciate that much over time and after some years, their value remains fixed.

Most ATVs will lose its original value in 3-4 years from their first use, with some models losing as much as 30% of its core value, but a good thing is that after that period – their prices remain mostly the same.

Stronger models, of course, lose less value, but you have to be aware that most generic models tend to depreciate for the first 3-4 years. Let us see a general idea of how that works.

This chart shows the amount of deprecated value as a percentage of the original cost.

As you can see, most models will reach its peak depreciation in three-years’ time, after which their value will remain mostly the same. Despite being quite good long-term, ATVs will lose their value, but there are some things you can do to slow the process down and reduce the percentages as presented above. They are:

This list also reveals the things that most often reduce the price, so if you’re interested about them – just imagine the opposite side of the above mentioned elements.

Here’s a quick video showing some tips for maintaining your ATV.

Is it worth buying a new ATV?

Now that we have seen that ATVs cost a lot and why they cost so much, let us see whether it’s worth buying a new one. A new ATV will usually cost somewhere around $10,000 (but there are models that cost even $20,000)

And we all know the usual benefits of buying new stuff – it’s more durable, the quality is better, it’s clean, it smells of new stuff, etc. – but is it really worth it when ATVs are concerned?

Why? Well, as we’ve established above, ATVs are very durable and very reliable, so if you know someone who has a used model they’re willing to sell and you know he’s taken care of it, you can get it for four to five thousand dollars and you’ll still have a durable product that’ll last for years.

So, if you really don’t need a new model, a used ATV that is well-maintained is a more practical solution for you.

What is the best ATV brand?

Well, if you’re now set on buying a new or a used ATV, we are going to bring you a list of the best and most reliable brands and models in several categories, so you know which you should consider, having your specific needs and wishes in mind. Here is the list:

We have explained the reasons why they are so expensive and how reliable they are, but also how long they hold their value. In the end, we’ve given you advice on buying new or used models and the best brands and models out there. We hope we’ve helped, and stay tuned for more! See you next time!