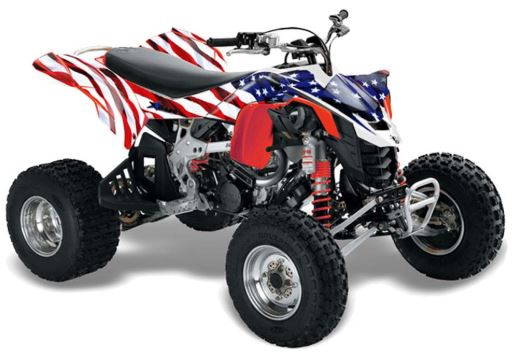 It’s hard to find an ATV that was designed, manufactured, and assembled completely within the United States now a days. A lot of companies will claim ‘Made In The USA’ but really what they’re talking about is ‘assembled in the USA’. A lot of the parts will be made over seas and shipped into the US to be assembled.

There’s nothing wrong with wanting to support your country and the hard workers in it by buying from companies in your country. But it’s getting harder and harder to find an American only made machine. But what if you want to get as close to made in the US as you can, where do start?

Polaris and Arctic Cat are the two ATV brands that mostly manufacture in the United States. Polaris manufactures most of their parts and ATVs in Osceola, Wisconsin and is head quartered in Medina, Minnesota. Arctic Cat uses Suzuki engines in their machines, but the engines are designed by Arctic Cat engineers, just built over seas by Suzuki.

Even though Polaris manufactures their own engines in the USA. Not all of the parts used are necessarily made in the US. For example the pistons and heads are typically shipped in and used to build the ‘American Made’ engines.

Of course, Kawasaki, Yamaha, Honda, and Suzuki are all designed and manufactured over seas. But even that has some caveats. Like for instance Yamaha assembles many of their machines at their facility in Newnan, Georgia. But again, all the parts are shipped in from over seas.

Can Am was a well known company in North America for having all their machines manufactured and produced in Canada. Until around 2008 they started assembling a lot of their quads in Mexico.

When all is said and done, the closest you will get to made in the USA is Polaris or Arctic Cat, even if some of their models use parts sourced from other countries. This same thing can be seen in the automotive industry as well. It’s just become way to common to outsource production and use parts manufactured over seas.

Are ATVs Made In The US Better?

Most of the big brands now a days will assemble the ATVs in the country they plan to sell them in. For example, Honda has assembly plants in Ohio US, Indiana US, Alabama US, Ontario Canada, Swindon UK, Ghent Belgium, and a handful of other places but you get the point.

Basically, almost any brand you decide to go with will support jobs in the US. Of course, buying Polaris and Arctic Cat will offer much more support, but are the ATVs any better because they are made in the US?

Well, not really, and it depends what features of an ATV you value the most. For example, Polaris has been known to have great suspension systems, all of which are made in the US. But the machines tend to be heavier. That may not be an issue on a utility quad, but for the sporty quads, lighter is better. With the over seas manufactured parts, you’re looking at a couple hundred pounds lighter in some cases.

So there you have it. There is no one company that solely designs, manufacturers, and assembles all completely with the United States. In fact, a lot of foreign ATV brands will still assemble in the US, and most manufacturers outsource parts from over seas either way.

The closest you will get is Polaris or Arctic Cat, but even then, some of the parts come from over seas. Even most of the foreign brands that sell in the US, still support US jobs by assembling here in the states.