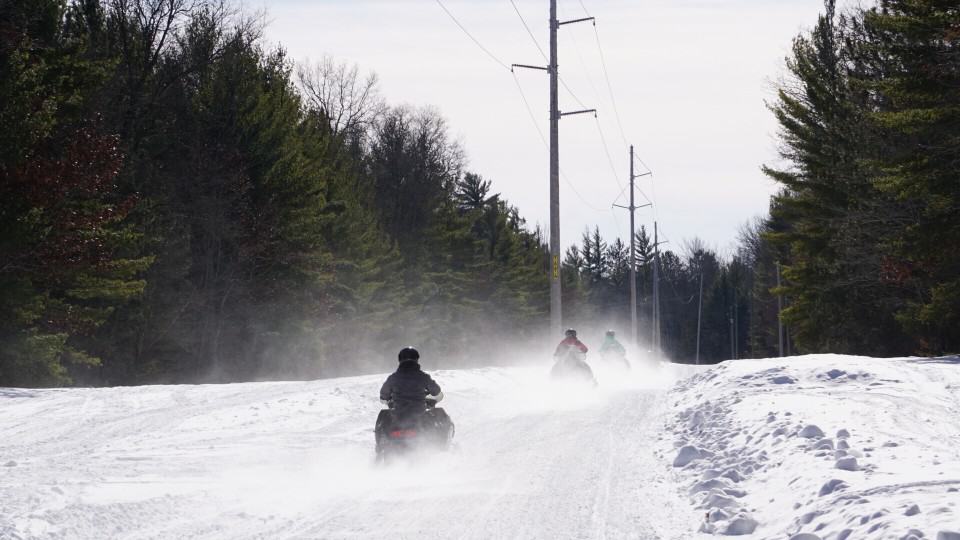 Snowmobiling has become a very popular winter sport. Over two million people in the United States participate in the sport annually. If you are a snowmobiling enthusiast looking for information about when snowmobiling trails open, you have come to the right place.

Snowmobile trails open November 18th and stay open until March 12th, on average. Those dates change year after year and for different regions because trail openings are dependent on the levels of snow and temperatures in the area.

Snowmobiling trails open during the snowmobiling season when temperatures drop and snow starts falling. People start getting their snowmobiles ready as soon as the first snow of winter arrives.

Where snowmobiling is popular, trails typically open near the end of November after some snow has piled up.

Here’s a chart with the average dates you’ll see snow mobile trails opening in different areas. Keep in mind, these dates change every year due to weather.

Continue reading to find out the times and dates when snowmobile trails open in different parts of the country.

When Snowmobile Trails Open In Wisconsin

November typically signals the beginning of winter in Wisconsin. Days start to become shorter and sunlight progressively decreases. Full-blown winter is seen in December with the Northern Highlands being the coldest part of the region [via Winsconsin USA].

Snowmobile trails start to open in Winsconsin around November. The average opening date in Wisconsin is November 20th. It is a very popular sport in the area due to the heavy snowfall.

There are several snowmobile trails in Winsconsin making it an ideal place for people who want to have some fun on their snowmachines. The trails are usually open until around March.

March typically signals the beginning of Spring in Winsconsin as days start to get warmer. Conditions for snowmobiling progressively declines and trail owners start to close up.

Snowmobile trails open again when conditions are favorable for the sport – in winter.

When Snowmobile trails open in Ontario

The Northern parts of Ontario are the coldest and it snows early in this region. Snow can be seen in Northern Ontario as early as October. The Southern part starts to see snow in November. However, full-blown winter sets in by December. [via settlement]

Ontario’s snowmobiling season typically comes to an end between March and April. Trails are closed and preparations are made for the next winter. March usually signals the beginning of spring which is essentially a rainy season.

When Snowmobile Trails Open In Minnesota

The first snowfall in Minnesota is usually seen in November. There are times when snow may arrive as early as October. However, full-blown winter arrives in December.

Most trail owners start to groom their trails. People can start snowmobiling as soon as the trails are open but there is the need to be extra careful if their trails run through swamps and lakes.  This is because the entire terrain will not be completely frozen yet.

Swamps and lakes will become completely frozen as the season goes on. The trails will be open until around March when spring conditions start to set in. There’s still a pretty good base for snowmobiling but the lack of snow will begin to show. Grooming operations will cease and trails will be closed until the next winter.

When Snowmobile Trails Open In Maine

Maine sometimes referred to as the Pine Tree State, has very good snowfall which makes the region suitable for snowmobiling. November usually signals the end of autumn and the transition to winter. Snow begins to fall in November even though there is still rainfall. However, days start to get shorter and temperature plummets.

Overall, Maine’s November’s weather conditions are unpredictable. It could be beautiful and sunny on a day just for the snow to fall the next.

Snowmobiling trails in Maine start to open in November. The average date for snow mobile trail openings in Maine is November 27th. But, that date varies every year based on amounts of snowfall and temperatures.

Winter fully sets in December with all the terrains frozen and ready for snowmobiling. The Northern part of the region is usually colder than the coastal areas.

December is one of the best times snowmobiling and skiing enthusiasts should visit. Tourists wanting to experience White Christmas will do well to go to Maine at this time. Winter continues till March with January being the coldest month.

Spring starts to begin in March but there’s still enough snow for skiing and snowmobiling. All winter sports come to an end by the end of April. A large proportion of the snow would have melted by this time.

When Do Snowmobile Trails Open In NY?

Snowmobiling is a big business in New York generating a lot of money for the state. People interested in this sport can ride on trails spanning over 10,000 miles on private property and state lands. New York has over 200 snowmobiling clubs that groom and maintain the trails.

Snowmobiling trails in NY start to open in December. The average date for snow mobile trail openings in NY is December 10th. But, that date varies every year based on amounts of snowfall, temperatures, and the hunting season.

You can know which trails are open from the clubs that maintain the trails. This information can be found on the club’s website or Facebook page. Also, here is an interactive snowmobile trail map for New York.

It starts to snow in New York in December and trails start to open around this time.

However, significant snowfalls occur in January and February. And the winter season comes to an end in March. It’s possible for snow to arrive as early as November and stop as late as April. But this is extremely unlikely.

When Snowmobile trails Open in Michigan?

State-designated trails in Michigan open on Dec. 1 and close on March 31. Snow begins to fall in Michigan around November. There are times when snow arrives early and starts to fall in October. But usually, November is the transitional period to Winter.

Winter comes into full force in December with temperatures plummeting. Days become shorter and snowfall becomes heavy. People wanting to experience White Christmas or participate in winter sports will do well to come to Michigan during this time.

The snowmobiling season is scheduled to end in March as it signals the transition to spring. By April, days become warmer and conditions are no longer suitable for snowmobiling. As you’d expect, the trails become open again when the snow returns.

Snowmobiles have evolved over the years to become as we know them today. There are models capable of producing over 150hp. Newer models are turbo-charged leading to a considerable increase in engine horsepower. Riders’ have to put their trails into consideration when choosing their snowmobiles.

A number of aftermarket accessories – like handguards and windshields – are available in the market. These accessories improve the performance of snowmobiles and help keep the riders safe.

Skill and physical strength are crucial to properly riding a snowmobile. Like any other sport, accidents occur when snowmobiling. And the leading cause of fatal accidents for snowmobiling is unsafe speed. When compared to on-road motor traffic, injuries from snowmobiling tend to be more fatal.

Another cause of accidents on a snowmobile is the loss of control. As stated earlier, physical strength is needed when riding a snowmobile for a strong and firm grip. A loose grip can easily cause the rider to lose control of the snowmobile. The rider could fall off and then get injured.

It’s important to avoid riding too early or too late in the season. And if a rider must go out on the trails during this time, then lakes and rivers should be avoided. Lakes aren’t completely frozen during early or late winters. And a rider could fall through weak ice very easily.