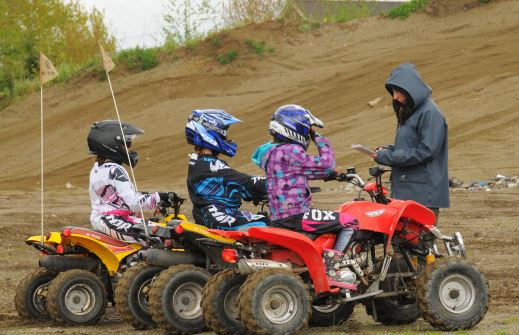 Four wheeling is a family sport, getting your young ones familiar with ATVs at an early age is always a good idea. But at what age? And what’s the best way to introduce them to ATVs early on?

I get it, you want your kids to be out enjoying the trails with you as soon as possible. But with children, you have to make safety a number one priority. Let’s start with your role as their parent throughout this process.

Your Role As Their Parent

Think of yourself as your child’s very own safety instructor. You should try to reinforce the importance of safety gear and safe riding techniques. In the beginning, this will require a lot of attention. But over time, with persistence, they will start to catch on to the safety rules you set in place all on their own.

It’s a good idea to set safety rules for your kids that they must follow every time they use an ATV. I will go over some examples we’ve used that seem to have worked well for us later on.

Depending on the age you start your kids off on ATVs, you will have to supervise their first outings pretty closely. It’s good for them to have you nearby to ask questions. Not to mention all the ‘look what I can do!’ they will most certainly enjoy having you there with them.

But more importantly, you should be watching how they ride. Keep note of anything you want to discuss with them later that will help them develop their riding skills.

The age old saying ‘teach em right, teach em young’ most definitely applies with ATV riding. If you get the right techniques and safe riding skills down early on, it will carry on as they grow older, keeping them safer on the trails even after they out ride you.

But what techniques do you teach them, and what safe riding practices should you have them follow? Not to worry, we will go over that later, but first lets talk about what age they can start and what quad will fit them best in the beginning.

When To Start Your Kids With ATV Riding

It’s generally recommended that you wait until your child is 6 years old before you get them started riding ATVs. If your child is showing advanced motor skills at 4 or 5 years old, you may be able to start them a little earlier. But most small ATV manufacturers recommend the rider be at least 6 years old.

If you’d like to start them younger than that, you could always get them one of those small electric ATVs rated for 3 year olds. That way you can start teaching them the basics and safe riding early on. A good example is this 12V Kids ATV Four Wheeler from Amazon for around 130 bucks.

Most of the small kid sized ATVs will come with a throttle limiter that lets you set the maximum speed the quad will go. This is a good idea to set yourself, in case your kid wants to get a little throttle happy, they won’t be able to get up to dangerous speeds.

What Size ATV For Your Kid

This chart is just a reference for starting your child out on which size quad. This won’t necessarily be the size quad they can handle when they get into that age bracket.

For example, if you started your kid on a 50cc when they were five, by the time they’re 12 they may want a 250cc, and will probably be able to handle it. But if your child is 12 now, and you’re starting them riding for the first time, 125cc might be a safer bet.

How To Start Your Kids With ATV Riding

Look Through The Users Manual

I always like to look through the users manual myself a little bit to get an idea of the components of the ATV. This is a good precursor to actually riding for the kids too. They may be a bit jumpy and not like this step so much, but for me, I think it’s worth it.

It’s good to show them how the ATV works, recommended maintenance, and safety requirements that come straight from the manufacturer. That way they see that the safety rules you set in place are meant for everyone, not just them.

Check Over The ATV

This part is really up to you to decide how thorough you want to be. If you’re like me, you want your kids to maintain their own quads themselves one day. So talking about the different parts of the quad and what they do doesn’t hurt.

Of course, a helmet and goggles are the most important pieces of safety gear for anyone riding an ATV. But I would also recommend a good pair of riding boots and gloves as well. Some parents even require their child wear a neck collar to protect their neck in case of a crash.

Safety gear is a pretty big topic all to itself so I wrote a Protective Gear For Children On ATVs article to go into a lot more detail about safety gear, as well as give you some examples of the most trusted safety gear for kids on the market.

You really should make a set of safety rules, and make sure your kid knows them before getting out on a quad. Of course, the rules you make for your kids is up to you, but here’s an example of some of the riding rules we use.

Those last couple had to be added just recently. The best way to make sure your kids follow the rules, is to follow them yourself. Lead by example, and the kids will just naturally accept and follow the rules with you.

I recommend staying off paved roads while you teach them the basics of riding. Most ATV tires aren’t made for pavement anyway, and it could skew how they feel the quad will handle. Stick to off road dirt trails or something like an open field to start practicing in.

I’ve found the best way to get them going at first, is to just practice starting the ATV, accelerating forward a little bit, and then coming to a complete stop. It’s a good idea to just be standing there next to them, and walk along side them as they do this.

Be ready to grab the brake if you need to, but usually they get what the brakes do and are good about using them. Just try stopping and starting for a little while so they get the feel of how to accelerate and get familiar with the brakes.

After they get the feel of the throttle and the brakes and you’re confident they can handle it. Try having them do some turning. Get them to ride in a big circle and then have them try doing some figure 8’s to get a feel for the handling of the quad.

You could try laying down some cones or old soda cans, anything that they can try steering through or in and out of to get some practice. Now’s a good time to remind them that the cones will be trees on the trail, and if they hit a tree, they could get hurt.

After you’re confident they can ride the ATV on their own in the open area, you can start taking them on the trail with you. Getting to this point will take more or less time for different kids, just try to be patient with them.

During the first few trail rides, I would suggest following them, but tell them to go really slowly at first. I used to think it was best that they followed me. so I could set the pace. But once I started letting them lead, I could notice things about their riding that I could make suggestions about to help them become better riders.

If you do decide to let them lead at first, make sure you’re on trails you’ve riden before to prevent any surprises. Also, I would stay away from big puddles or any deep water until they get a little more experienced.

Keep practicing with your kids and helping them to become better riders, and they will be out-riding you in no time. Off-roading really is a family sport, and it’s a blast getting out on the trail with the whole family.