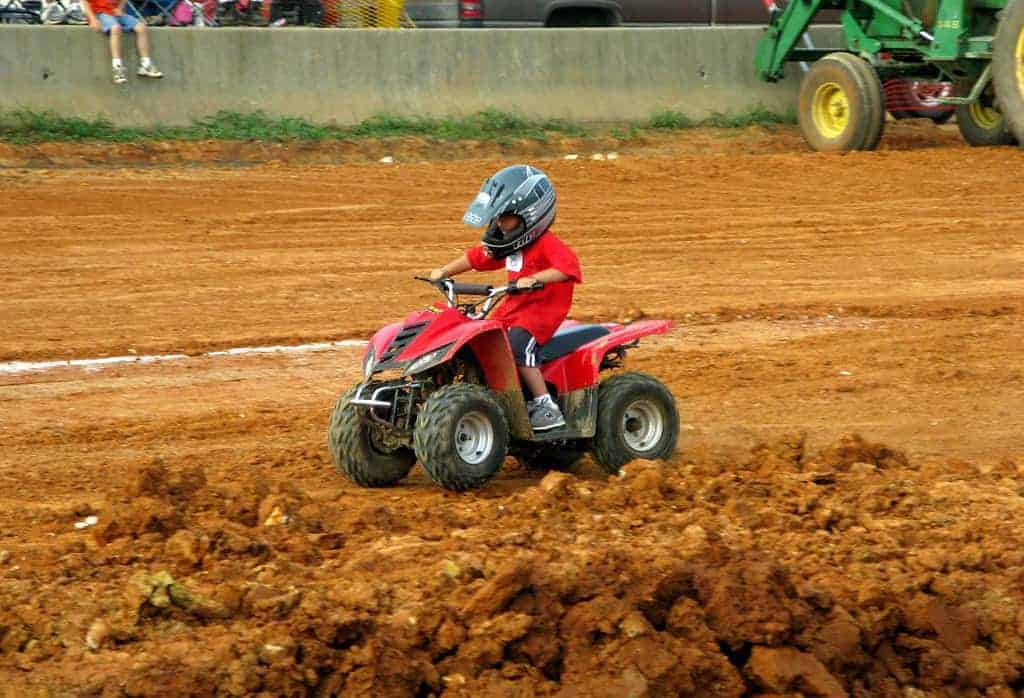 ATV riding is a fun sport enjoyed by riders of all ages and particularly appealing to teenagers and children not yet old enough to drive a car. Most ATVs are too big for young children to handle, but there is a huge range geared towards teenagers and smaller framed kids that could be suitable for younger ages. There’s definitely no maximum age when it comes to driving an ATV, but is there a minimum?

The answer varies depending on where you live. In the US, there is no federal law to dictate a universally agreed minimum age for legal ATV riding, but each state has different age limits.

Riding on private land is not restricted and some trails are designed for youngsters. State laws usually apply to riding in public or on the highway. In most cases, riders will need a license to drive any vehicle on a highway, including an ATV.

In many states, the legal minimum age to drive an off-road vehicle is 16 but there are variations and some extra guidelines:

Arkansas – children under 11 can ride an ATV with supervision, those over 12 can legally ride an ATV

Idaho – no minimum but under 18s need to wear head protection

Indiana – no minimum but riders under 14 need adult supervision

Kentucky – under 16s have to wear helmets and are restricted to engine sizes of 90cc or below unless supervised. Under 12s are not allowed to ride anything bigger than 70cc.

Massachusetts – any riders under 18 have to pass a state-run safety course before they are allowed to ride. Those under 16 must be supervised by a parent or guardian who has also completed part of the course. Riders and parents have to carry evidence that they have successfully completed the course. Under 14s are not allowed to ride an ATV unless competing under a controlled race and they are limited to small engine size.

Michigan – the laws in Michigan vary for teenagers of different ages. Anyone under 16 has to have passed a safety certificate and be supervised by a parent or guardian. No one under 10 is allowed to ride a quad with four wheels or more. Under 12s can ride four-wheelers as long as they are on private land owned by their parents. Under 16s are not allowed to drive three-wheelers. There are also regards about riding on the roads, with under 12s not allowed to cross a road and under 16s only allowed if they are carrying their safety certificates.

Mississippi – kids under 16 are allowed to drive an ATV as long as they wear a helmet.

Montana – the minimum age for riding on a road is 12. Anyone over 16 needs to hold a license to ride on the road while those below have to have a safety certified and be supervised by a license holder. There is no minimum for riding on private land.

New Hampshire – everyone under 18 has to wear a helmet with eye protection. Anyone driving on a highway needs a car license but children aged 12 or over can ride as long as they are supervised by an adult who holds a license. Under 16s also need to have passed a training course approved by the state.

New Jersey – minimum age to drive on public land is 14, Under 18s need to have completed a safety course and under 16s are limited to engines less than 90cc.

New Mexico – no minimum age. Under 10s have to ride an ATV that is not too big for them as well as pass a safety course and be supervised. Everyone under 18 has to wear full head protection and are is not allowed to carry passengers.

New York – minimum age is 10 and under 16s are only allowed to ride on private land under the supervision of their parents. There is also an ATV safety course that is compulsory for under 16s.

North Carolina – minimum age is 8 with engine size restrictions for under 10s of 70cc and under 16s of 90cc.

Ohio – under 16s have to be supervised by an adult and can only ride on private land unless agreed by the department of natural resources.

Oregon – the minimum age for driving in public is 7 and under 16s have to be supervised by an adult who holds a permit.

Texas – no minimum but adult supervision needed for under 14s

Utah – head protection is a legal requirement for under 18s

While each state has its own laws according to minimum ages, manufacturers have their own recommendations. Their range of smaller engines are specifically designed for younger teenagers and kids but they all recommend wearing safety gear, especially a helmet and eye protection.

Most manufacturers state that children should not ride ATVs designed for adults, but states do not impose these guidelines as law. The general consensus of opinion is that parents and supervising adults should be capable of deciding what their children are able to drive.

Obviously, kids need to have the physical size and strength to manage the weight of the vehicle, but some kids are better riders than most adults!

Most ATVs are not designed to carry passengers, although you might see plenty of people pairing up on single-seat machines. Manufacturers cover themselves by stating that carrying passengers is not allowed, and most states will not allow under 18s to carry passengers on the highway, but what riders get up to on private land is not really controlled.

UTVs designed to carry more than one passenger are usually safe, but again under 18s should not really be carrying passengers on the highway in most states.

At the end of the day, whether kids are old enough to ride an ATV or UTV is largely a case of using common sense. The more skilled the child, the more able they are to control bigger machines but oversizing an ATV is a recipe for disaster.

Smaller engines might be considered safe enough as the maximum speeds are lower and smaller machines are easier for lighter people to control. Riding at speeds needs quick thinking and fast reactions which might be harder for younger children, but as long as they ride sensibly and build up their skills slowly with supervision, younger children can start their ATV adventures as soon as they are big enough to control their machine.

If you haven’t gotten all the safety gear for your kids yet, check out this ATV Protective Gear For Kids article on this site. Or visit the Recommended Section to see the gear I’ve tried and tested for you.