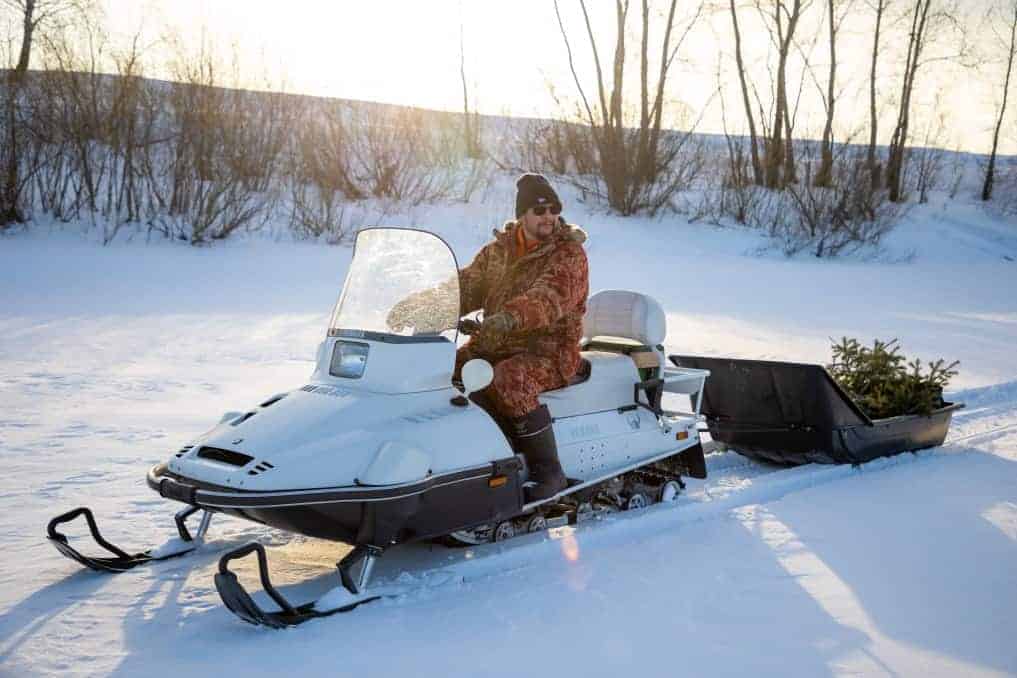 We all know snowmobiles as sports vehicles or recreational vehicles, but these snow-riding gizmos also have other applications. We are going to discuss utility snowmobiles and give you all the necessary information about them.

A utility snowmobile is a type of snowmobile used when you need assistance in the snow. You can use it to tow another snowmobile, carry cargo, deliver goods, or anything else which you need the help of a vehicle capable of driving in the snow.

Utility snowmobiles are snowmobiles like any other. They actually look pretty much the same and they will drive you through the snow just the same. But there are some differences and we are going to see what they are.

Their designs are generally very similar, with the utility snowmobile being adapted for carrying and towing than rather just for driving around. These changes aren’t that big, but they are something that is worth mentioning.

You certainly won’t achieve the same speed as with regular snowmobiles, but you’ll get to enjoy the scenery and be helpful at the same time.

Check out this quick video a utility snowmobile comparison to get an idea of what most people are looking for in a utility sled:

Pros and Cons of Utility Snowmobiles

The specific differences between them actually mean that there is no special reason to chose one over the other, besides your personal needs. So, it really depends on you and why you need a snowmobile in the first place.

But still, if you’re facing a dilemma, we are going to list the main pros and cons of a utility snowmobile for you so that you know what you’re thinking of buying.

One of the obvious advantages of a utility snowmobile is that it can carry or tow more weight than a regular snowmobile.

So, if you ever need any help in the snow, a utility snowmobile will do a much better job than a regular snowmobile.

Another advantage is that it is much more durable as it is made to take a lot of “abuse”, especially when compared to a regular snowmobile.

A utility snowmobile has only one obvious downside, but it won’t matter if your needs are more adapted for this type of snowmobile.

Namely, due to it being a utility vehicle, a utility snowmobile cannot achieve the same speed as a regular one; they’re just slower.

The difference is not that big, but it is significant so if speed is your priority, you should get a regular snowmobile, rather than a utility one. Not to mention, everyone you go riding with will want to store their gear on your sled.

These snowmobiles cost between $8,000 and $13,000 and have, all of them, been getting five-star reviews. These are some great examples of the most popular utility snowmobiles out there:

A 2-stroke model with a reverse function will certainly do the trick for anything you might need assistance with in the snow. (source)

This model is very similar to the one above. It likewise uses a 2-stroke engine, is designed to hold only one person, does have the reverse function, and does not have a turbo charge. But along with an electric start, it also has a pull-based one. (source)

Another Yamaha model, this one doesn’t really differ from the first one when technical specifications are concerned – they are completely identical. The difference is that this version is a lite model that is a bit “lighter” when compared to the Transporter 800 model. (source)

The Voyageur 500 is a model similar to the ones mentioned above, a 2-stroke engine, one person, no turbo charge, but with a reverse function. It also uses an electric start, but there aren’t any major differences when compared to the other models mentioned above. (source)

This is the only truly different model on this list, similar only in that it has an electric start like all of the others. The Skandic 900 has a 4-stroke engine, and while it likewise does have a reverse function and does not have a turbo charge, it is also specific in that it can carry two passengers.

Which makes it the “biggest” model among the top five on our list. (source)

Whichever you chose, you’ll do good, so in such a situation, you might even look to save some money.

And this covers everything you need to know about utility snowmobiles. We have given you a working definition of a utility snowmobile, comparing it to a regular one so that you know all the differences, both when their purpose and their designs are concerned.

Next, we have given you a thorough cost-benefit analysis of utility snowmobiles so that you know whether one will actually fit your needs or not.

Finally, we have provided you with a list of some of the best models out there so that you know which one to buy, if you actually decide on getting one for yourself.

We hope that we’ve been helpful and that we’ve provided enough information for you too! Keep following us for more and see you next time!