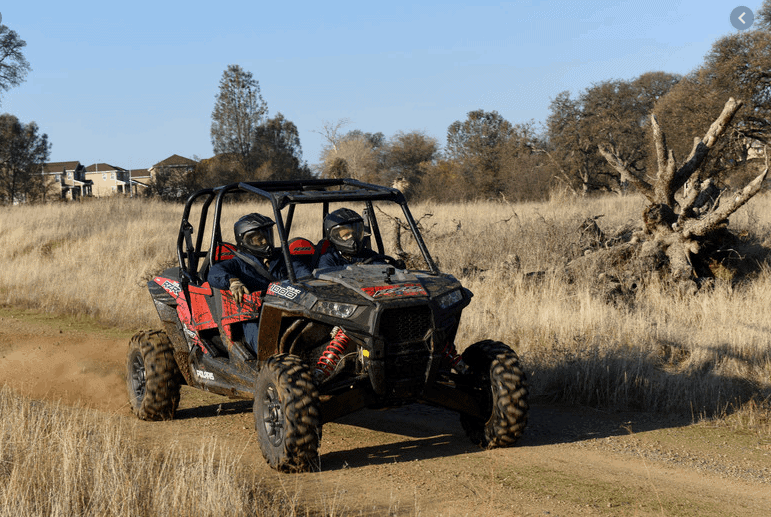 If you want to get more speed and power out of your ATV, turbocharging is one of the best options. But there is more to a turbocharged engine than simply going fast.

Turbocharging an engine means modifying the exhaust system so that no power is lost through exhaust gases. Putting all that extra air back into your engine gives you a great extra punch and plenty of muscle. It will also give you more horsepower and massively increase your top speed.

Adding a turbo to an engine works by adding fans which redirect wasted heat and air that would otherwise be expelled through the exhaust back into the system where it helps the engine burn fuel more effectively, therefore go faster. By making the engine run more efficiently in this way, you gain maximum speed without having to go for a bigger engine.

You can keep your small engine and gain more power without needing to upgrade. This is particularly handy for ATV riders as keeping the engine small keeps the overall weight of the vehicle down. The smaller engine is also cheaper to run than going for something bigger, so you gain the speed without spending too much more on fuel.

The extra speed from a turbocharged engine tends to be top-end horsepower rather than torque, so it can be great for racing ATVs or riding trails that offer long stretches of easy terrain. It won’t necessarily help you get out of a bog or over a tricky obstacle. Increasing speed without going for a larger engine can also be helpful for racers as many races are split into categories according to engine size, therefore a bigger engine would mean needing to move up a class.

One of the main disadvantages of turbocharging an ATV engine is the initial cost. If you are looking to buy an ATV with a turbo already fitted, you can expect to find a much higher price tag. If you are looking to add a turbo to your own ATV, you will need to buy expensive parts or employ the skills of a professional.

ATV and UTV technicians don’t come cheap, and adding a turbo to an engine can be expensive. There will also be additional parts to fit onto the engine which may be difficult to squeeze in if your quad doesn’t allow much space around and between its parts. You may need to alter or remove some of the surrounding bodywork.

Another disadvantage is that most turbocharged ATVs use more fuel than their non-turbocharged counterparts, although this still might be less than a big engine will need. Helping fuel burn faster means using more fuel than before. Turbocharging will probably make your ATV more expensive to run.

You might also find an increase in maintenance costs when a turbo is fitted since there are more parts to go wrong and your engine will be working a little harder if it is burning fuel more quickly than before.

Turbocharging increases pressure and temperature which can make a range of parts in your engine wear out more quickly, including valves and pistons. Your turbocharged ATV engine can also throw some unexpected oil leaks as the seals give way to the increased pressure.

Choosing a turbocharged ATV might mean your machine sounds great and has some amazing extra speed to give you a boost when you need it, but it can also mean that it ends up in the shop more often than you would like. Most ATV riders like to do their own engine work where possible, but fitting a turbo can over-complicate matters meaning you need to pay a professional more often.

Most of the pros and cons of turbocharging for a UTV are the same as for an ATV. Since the type of power created by turbocharging is best suited to traveling at speed, whether or not a turbo is an advantage depends on the job you want it to do.

If you are looking at racing your UTV, increased speed without the weight of a large engine will allow you to reach even faster speeds than a larger engine and you can still join races in the small engine categories, as with an ATV.

A more efficient engine also results in less pollution which can make the ride more comfortable for your passengers. If it’s a sport UTV you are after, you’ll find most of the best models come turbocharged.

If your UTV has some heavy towing to do, you may find a turbo doesn’t give you the power you need. When you are looking for extra torque to haul heavy loads, you need the power of a larger engine as pulling for long periods of time or working on steep gradients can put strain on a turbo engine.

The added expense can be a problem for UTV owners, as UTVs can already cost significantly more than a smaller ATV before you even think about a turbo. Turbocharged engines can also consume a great deal more oil and be prone to oil leaks that can make them less reliable.

Something else to think about is that turbocharged engines don’t work as efficiently in hot weather, which may cause a problem if you need your UTV to run your business all year round.

What to Expect: Speed, Power, and Handling

A turbocharged engine will give you a powerful boost that can make you feel on top of the world. The feeling of extra speed as the turbo kicks in is like no other. Of course, with speed comes danger and careful handling of a fast and light vehicle is never more important.

There may be a lag when you first accelerate followed by a sharp blast of power that can catch you off-guard if you weren’t expecting it. The boost can cause a speed wobble or jerk that can unbalance your steering or even cause you to tip if you aren’t careful.

What to Expect: Having a Turbo Fitted

There is more to adding a turbo to an ATV or UTV than just applying fans to the engine. The braking system and suspension might all need reinforcement to cope with the extra potential speed.

You will also need to make sure the size of the turbo is correct for the engine as if the turbo is too large, a smaller engine will not be able to power it. As well as the turbo itself, you will need to look at air intakes and a cooling system that might include water or liquid injection.

To see what you’re looking at with adding a turbo to your machine, have a look at this decent priced Mini Turbo Turbocharger I found on Amazon. This thing was made for small engines, just make sure you select the right size for your ATV or UTV.

To Turbo or Not To Turbo?

Some of the best ATVs and UTVs on the market today come fully equipped with turbo engines that will suit any speed demon and their popularity shows these engines are becoming more reliable and economical all the time.

With enough speed to make a rocket green with envy, many of these machines are topping the polls for racing, fun, and sports vehicles. However, if you are an inexperienced quad rider you might find a turbo a little too much. Similarly, if you are looking for a UTV workhorse needed to work more slowly or tow, you might find a larger, non-turbo engine does the job better for you.

All in all, the turbo sensation is here and looks like it’s going to stick around for quite some time.

To check out some safety gear I’ve tried and tested for you, visit the Recommended Gear section of this site.