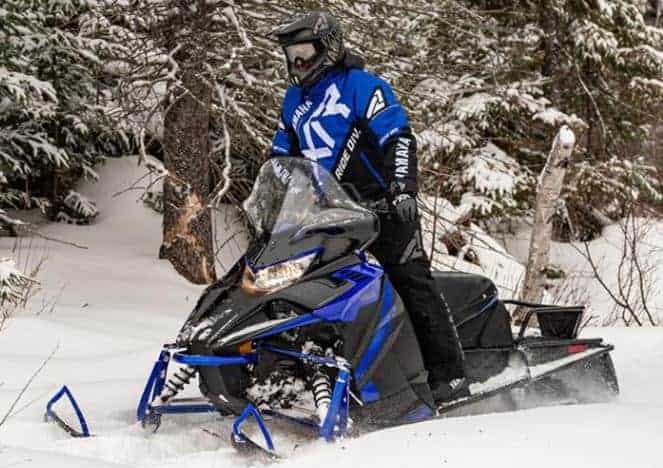 A drastic reduction in fuel to air ratio within the carburetor is the primary reason why a snowmobile won’t run unless you put it on choke or half choke. The fuel air mixture will need to be fixed to run the snowmobile with the choke off.

You don’t need to panic if your snowmobile runs only on choke or half choke because there are some steps that you can take to fix the problem. You will find these steps in this article, as you read on.

Follow all the steps below to make your snowmobile run without choke or half choke.

Remove the hood that covers the engine and inspect the fuel line. You don’t necessarily have to change the fuel line If it is clogged or collapsed. You can easily unclog the fuel line and straighten up collapsed parts.

Remove the fuel line and try passing fuel through it. Clear blockages with pipe cleaner tools or an air compressor.

However, if the fuel line cracks or splits, you must replace it with a new one. After you have solved all the fuel line issues, you should start the snowmobile and observe whether it runs without choke.

If the line is clean but not enough fuel is moving from the tank, it could be the fuel filter.

A fuel filter’s function is to screen out dirt from fuel, but if the filter becomes too dirty, it will hinder the free flow of fuel. So if your snowmobile runs only on choke or half choke, it would help if you check the fuel filter.

After you have spotted the fuel filter, inspect it carefully. If it appears too dirty, then you have to change it. Fortunately, a fuel filter is cheap and easy to replace. Follow the steps below to replace a dirty fuel filter with a new one.

I recommend checking out these Snowmobile Fuel Filters (link to Amazon), they usually have the best deals and can get them to you quickly.

Every fuel filter has an arrow that indicates the direction of fuel flow. Allow the arrow to point towards the carburetor while you are installing it.

You can cut off a short length from each end of the hose if the ends are too slack for the new filter. After you have fixed the new filter into the hose, you should clip it with a clamp.

For safety purposes, ensure you stay away from all heat sources while you are replacing the fuel filter. Once you have carried out the installation steps above, you should start the engine and observe whether fuel isn’t leaking around the new filter regions.

And of course, you should attempt to run the engine without choke to see whether the new fuel filter solves the problem.

Here’s a video showing how to replace the fuel filter and fuel lines:

If your snowmobile still requires choke or half choke to run, then you should proceed to the step below.

When you engage your snowmobile’s choke, it regulates the mixture of air and fuel within the carburetor. While the choke regulation is important, you can make the carburetor not to depend solely on it by setting the air-fuel mixture screw correctly. You will need a screwdriver for this adjustment.

Here is how you can adjust the air fuel screw within minutes.

A person who isn’t familiar with carburetor’s parts may find it hard to differentiate the air fuel screw from the idle screw since the two screws are always on the same side. Here is the major difference between these two screws.

The air fuel screw is smaller than the idle screw. Once you have identified the right screw, you should use a screwdriver to adjust it.

Since the goal here is to increase the fuel that flows into the carburetor, then you need to tighten the screw. It would be best if you tightened it gradually because an excess fuel flow into the carburetor can create a different problem.

The snowmobile will run without choke when you eventually reach the optimum adjustment level. In case the problem persists after several adjustments, then you should proceed to the step below.

Here’s a video showing how to clean a carburetor if you feel like going all out since you’ll be messing with it anyway:

Here is a fast adjustment technic that can help you save a lot of time.

If the issue persists after numerous adjustments, you should carry out the steps below.

The fuel pumps forces fuel to flow through the fuel line, so if it becomes damaged, fuel won’t flow well. Fuel contaminant is the primary cause of fuel pump damage.

To verify whether the fuel pump in your snowmobile is still functional, you should follow these steps.

To check the outlet, you should remove the hose that connects the pump to the carburetor. After that, you should connect the vacuum gauge to the pump’s outlet. Pull the starter cord again and observe what the gauge reads.

If the gauge reads a high pressure, it means that the pump still supplies fuel to the carburetor when the snowmobile is running.

After you have taken every necessary precaution, you should follow these steps in order to replace the pump.