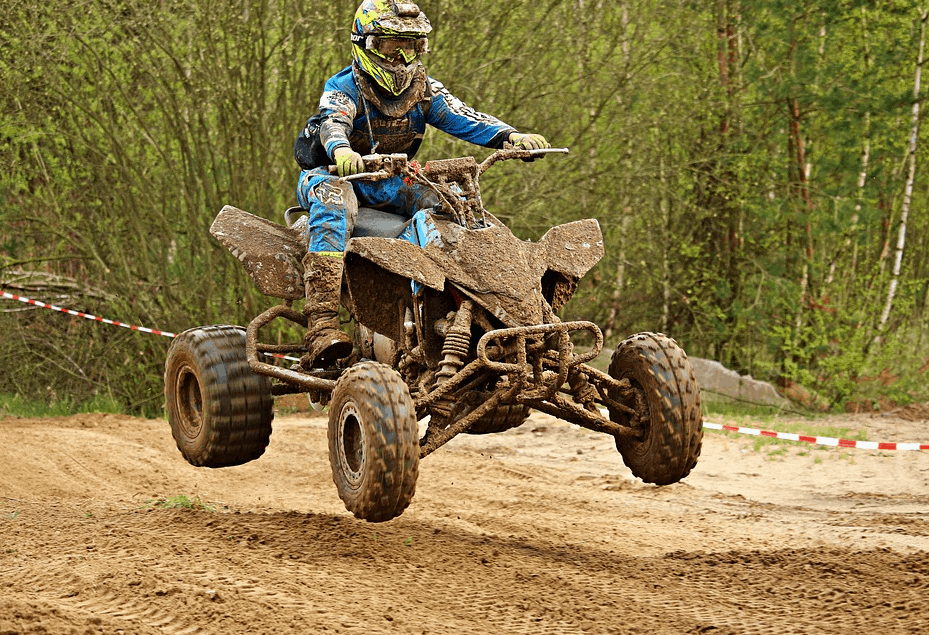 The lightest ATV on the market currently, is one with an engine capacity of 250cc or a sport model ATV. The average weight of a 250cc is around 410 pounds. An example of this lightest ATV for adults, is the Honda TRX 250EX. This bike weighs 360 pounds. Or a Yamaha YFZ 450 at about 350 pounds. The other quad bikes with lower cc capacity, however, are for kids usually around 50cc to 90cc. These ATVs will be the lightest out there, but are mainly for children.

There are also other light ATVs with 350cc. These will weigh an average of 490 pounds. The Yamaha Raptor 350 weighs 375 pounds, however and the heaviest of this category was the Arctic Cat 350 which weighs 588 pounds.

The 450cc ATVs are also considered light in the market. They averagely weigh around 520 pounds. However, in this class, there are two categories of ATV. There is a sport model and the utility model. The sport model is lighter and weighs sometimes even 400 pounds or less. The lightest is Yamaha YFZ 450 and it weighs about 350 pounds. The utility models are quite heavy and they will weigh between 500 – 700 pounds. An example is the Polaris Sportsman 450.

Why Look for a Lighter ATV

Many people will prefer purchasing a light ATV for their recreation, sporting or just riding around. These are some of the reasons why a lighter one is preferred by many.

• Light ATVs are easier to push

In case of something like a breakdown, you will be able to push the ATV to the nearest service station. Unlike a heavy one where you will be forced to leave it. Supposing you were alone in the forest hunting and the quad bike breaks down. If it’s a heavy one then you will have to leave it there to go looking for help if you can’t tow it. This, of course, puts your bike in danger of theft if left unattended or someone to look after it.

• With light ATVs you can handle easier while riding

A light ATV will also be easy to take controls and even in muddy areas, it will be easy to try to maneuver your way out unlike a heavy quad bike. With a light bike, you will be able to take on sharp bends with a lot of ease since you can be able to tilt and lean a bit.

• Light ATVs are easier to maintain

There are a few things you could check out on a light ATV, unlike a heavy one. The heavy ATV will mean that its internal structure and components are bigger, heavier, and harder to deal with. It’s harder to lift a heavy ATV out the mud for instance. Or pick up the front and put it on a jack stand to work on.

A lighter ATV is ideal for sports racing as the lightness property makes it be able to move very fast. A heavy one will derail fast movements because of the weight it carries with it.

Light ATVs are mostly used for sporting activities. Most of these bikes will have a capacity of 250cc to 700cc. They have great suspensions which can handle turns, bumps, and high jumps by the ATV. These sports quads are highly modified to fit the activities. These lighter quads are designed to handle the stress of racing without tipping over so easily.

A light ATV will also be very ideal for trick riders who perform tricks for a living or just for recreational purposes. A light quad bike will easily do a flip, but with a heavy one, you can be sure that is not possible. Heavy ATVs will be an issue even just lifting the front end, it will not bend for certain degrees lest it topples over possibly injuring the rider. The ATV has to be very light so that the owner will be able to perform multiple tricks over and over and again.

Lawn raking of your garden or backyard could also require a light ATV. The lawn rake does not use any fuel and gets dragged by the ATV. You will only be required to pull the rake over the area you need to be cleared. If you get a heavy ATV then it will destroy your garden with huge tracks left behind after the raking is complete. Therefore a light ATV will be very useful in such an instance even for your backyard.

In this section of this article, we are going to see the lightest ATVs according to their engine. It is obvious by now that the smaller the engine the lighter the ATV. So the ATVs with an engine capacity of 250cc are the lightest excluding the kids’ ATVs.

The Suzuki LT250R is the lightest one with an engine capacity of 250cc. This ATV was built between 1985 and the year 1992. It has good handling and easy to ride while it also has a lightweight frame. Some of the features of this ATV are:

• Manual transmission, the clutch is also present.
• Powerful lightweight engine.
• It has hydraulic disc brakes and also a chain drive.

There is also the CAN-AM DS 250. This ATV is sporty and can be used for sporting activities. It has an engine capacity of 249.4cc. The quad bike also has an automatic CVT transmission that has a chain final drive. It has an A-arm suspension that houses adjustable shocks. The front shocks do have travel inches of 5.5 while the rear provides 6.7 inches.

I once owned a 2 stroke Yamaha Blaster 200cc. That quad was light and quick. Wheelies were too easy, you could pop up the front end without even trying.

The article has covered some ATVs that are light and how they could be useful to you. I like the lighter ATVs for transportation reasons, but the heavier ATVs will have more power and be better suited for winch’s and towing. However, the ATVs that are deemed lightest are those with an engine capacity of 250cc such as the Suzuki LT250R and the Honda TRX 250EX. Anything lighter than that will be primarily for children.

As always ride safe. Check out the recommended section of this site to see my top rated safety gear.