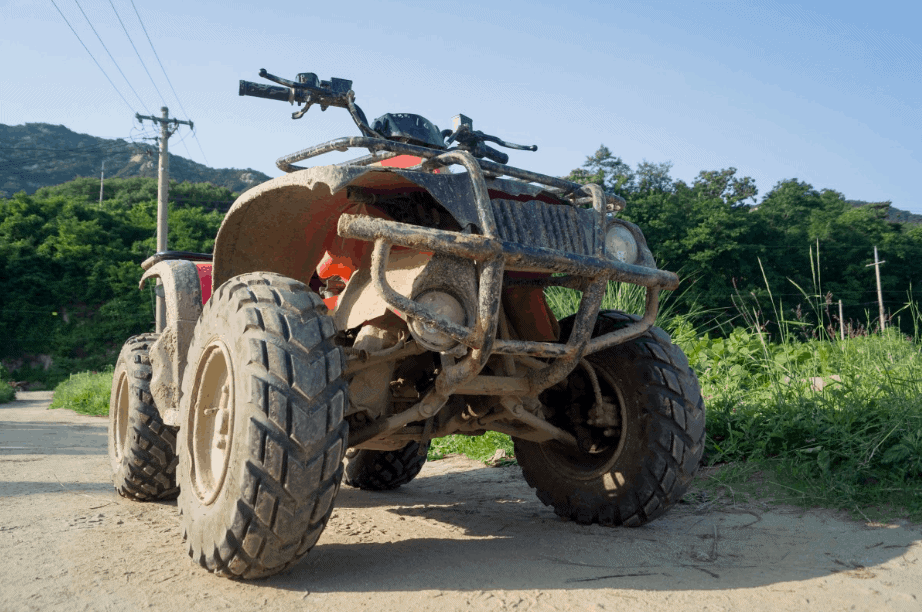 You need to mix gasoline with oil for a two-stroke engine and the oil is usually colored either blue or red to show the difference. You should be able to see the coloration if you take a look in the tank as the dye lets you know if two-stroke has been used in the can. You can also take a look at the shape of the exhaust pipe as a four-stroke will be the same width right the way along but a two-stroke will get wider.

Pros Of A Two-Stroke ATV Engine

Two-strokes sound louder and meatier, which may be either a pro or a con depending on where you use it and how you like your quad to sound. Two-stroke engines are usually smaller and they tend to run a little hotter which is worth remembering.

They produce more power for their size than a four-stroke and they can even run upside down, which could be handy if you end up on a tricky gradient! They are pretty simple engines which means you can probably do a lot of the work yourself.

They can also be more reliable as there is less that can go wrong. The best thing about a two-stroke is probably their authenticity: they sound and smell like a mechanical powerhouse and give a thrilling ride.

Cons Of A Two-Stroke ATV Engine

Some of the disadvantages of two-stroke engines come from having to mix the oil and gas. You need to get the proportions right and it adds an extra headache to getting ready to ride your quad, instead of just firing up and heading off.

The oil can be pretty expensive too. Environmentalists aren’t usually too keen on two-strokes either, as the emissions are pretty high. You get a strong smell and smoke from the exhaust when you fire up the oil in the engine on first starting.

The main disadvantage with a two-stroke engine is that they just don’t last very well: there is no separate lubricant system as the oil is mixed in with the gas so the parts tend to suffer wear and tear more quickly. They also use more fuel so a four-stroke might be more economical if you need the ATV for long-term work instead of just riding trails for fun.

Pros Of A Four-Stroke ATV Engine

Four-stroke engines last longer than two-stroke and don’t need their parts replacing as often. That said, there is a lot more to the engine and the whole thing is more complicated, so there could be more to go wrong. Not having to mix the oil and gas yourself is a bonus: you simply add oil to the reservoir tank and put straight gasoline in the fuel tank.

Engine oil for a four-stroke is different from a two-stroke: it usually costs much less but you need to make sure you get the right weighting for your machine. There should be a sticker somewhere to tell you what you need, or you could check the manufacturer’s guidance. Four-stroke engines are quieter than two-strokes and use their fuel much more economically so you get more miles for your money.

Four-strokes produce more power at lower RPMs than a two-stroke, so could get you out of a sticky situation with less work. Four-strokes are sensible machines, more grown-up than a frivolous two-stroke and ready for serious work.

Cons Of A Four-Stroke ATV Engine

Most people prefer a four-stroke to a two-stroke but they do have disadvantages as well. Beginners can find them tough to work on as the whole thing is more complicated and the engine itself is much heavier so young riders might struggle with the overall weight of the machine, especially when it comes to making tight turns.

A lighter two-stroke engine can also be better for racing as it can hit higher speeds more quickly and the overall weight of the four-stroke will slow it down. While a four-stroke should last longer than a two-stroke, parts may be more expensive and you may have to shell out for professionals to do the work for you as the engine is a lot more specialized.

It seems the two-stroke engine is dying out as most new machines are four-stroke, probably due to their lower impact on emissions and pollution. There are still plenty of die-hard fans of the two-stroke and some of the older vehicles are very much sought after. Which is best depends very much on what you want to do with your quad.

If it is used every day for work on a yard or farm, or if you come into contact with the public very often then a quieter four-stroke that costs less to run will be your first choice. If you are just starting out and want to be able to work on your engine yourself, a two-stroke can be more satisfying; its primal grunts and powerful fumes are pretty rewarding to a gas monkey.

If you’re looking for power, the instant kick of a two-stroke is far more exciting and can give you an adrenaline rush like no other.

Four-strokes are easier to come by, as manufacturers tend not to make two-strokes any more due to the emissions debate. You can still come by some new two-stroke dirt bikes. Some governments have started to look towards banning two-strokes in line with environmental policies.

Fortunately, there are still plenty of two-stroke ATVs around on the second-hand market and, as long as parts are still available, they should be around for a long time to come.

As always stay safe on the trails, to see some great safety gear check out the Recommended Gear section of this site.