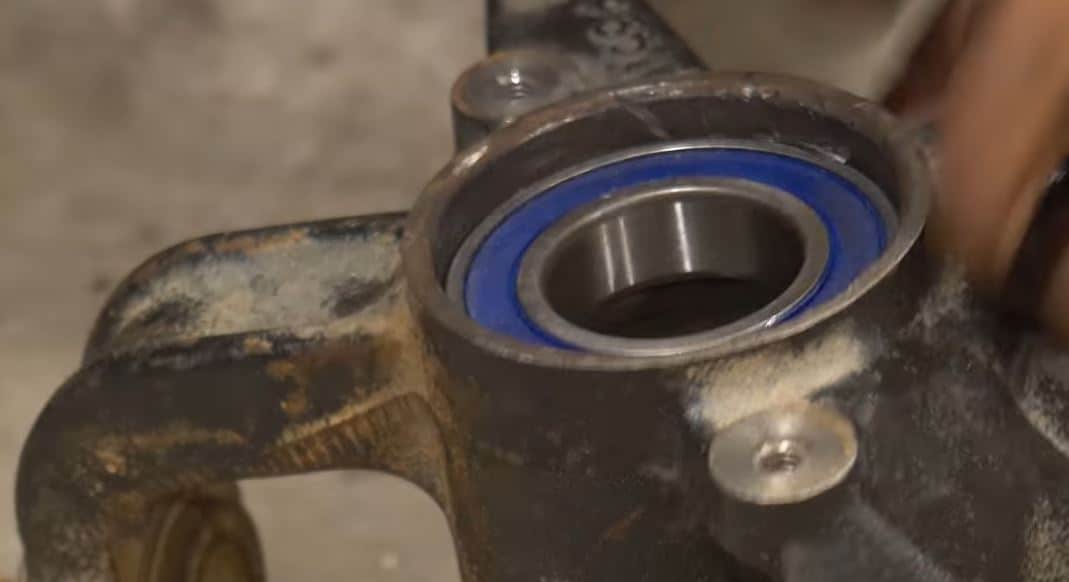 The wheel hub bearings on your ATV or UTV will no doubt need to be changed out at some point. It’s not that hard of a job to do yourself with basic hand tools you probably already have. They do make specialty tools to make the job easier, but I’ve done this with ordinary tools everyone already has in their garage.

The steps I’m going to go over are universal steps for all pre 2010 ATV and UTV wheel hub bearing replacements. For ATVs or UTVs made after 2010 the steps will be similar and you may to also read the alternate wheel bearing replacement section at the bottom of this article.

There may be slight differences from machine to machine. But you’ll get the idea of what to do, and should be able to handle any slight differences your quad has. Having your service manual handy will help. And with all maintenance projects, it’s best to wear eye protection and gloves.

Before I go into more detail about each of these steps, lets make sure you really do need to replace your wheel hub bearings. It’s not an extremely difficult job, but can take a bit of time and requires you remove a lot of parts from your quad. So lets make sure it’s necessary.

How To Tell If You Have Bad Wheel Hub Bearings

You’ll be able to tell if your wheel hub bearings are bad by the way your ATV or UTV is handling. One of the most common symptoms is a grinding sound and feeling when riding. You may also hear some clanking or banging type sounds coming from the wheel hub.

If they get bad enough, you could even feel vibrations and wobbling when riding. A wobbling feeling could also mean other things like you need to Balance Your ATV Or UTV Tires. If you notice the machine pulls left or right when braking, that could be a sign of bad wheel hub bearings as well.

If it’s been a while since you’ve last replaced them, or you have an older machine, it’s a good idea to do the replacement if your sure the problem isn’t your brakes or tires.

Most bearings come sealed, but over time, water and dirt will still find its way in there. There are ways to make the bearings last longer, which I’ll talk about later on. But eventually, they need to be replaced. Now on to the steps.

Lift The ATV And Remove Wheel

This goes without saying I suppose, but the ATV needs to be jacked up and remain so during this entire process. It’s a good idea to put in on jack stands as this can take a while and you don’t want your jack to fail.

Another safety measure you can take, after you take the tire off, put it under the quad near the jack stand. This is good to do just in case the machine falls off the jack or jack stands somehow. If you have a leg under there, it could save you a lot of pain.

I always start by loosening the lugs before I jack it up. That way it’s easier to remove when the ATV is lifted. You don’t have to worry about rocking the machine while its raised up if you get a stubborn lug nut.

The caliper will typically be bolted on with two bolts, either an allen head bolt or a 12mm bolt.

Remove both bolts and the caliper should come off easily.

This may be a good time to Change The Brake Pads On Your ATV if they need to be done.

The caliper may have a line going into it, that’s ok you don’t need to remove that or do anything else with the caliper. Just move it and let it sit somewhere out of the way the best you can.

This is to prevent the nut from loosening while you ride. The cotter pin is easy to remove with a pair of pliers. Some machines will have a stake nut here instead of a castle nut.

I found it easiest to remove the castle nut with an impact wrench. Sometimes they can stuck on there pretty good, and if you don’t have a breaker bar, doing it by hand can be tough.

Once the castle nut is off, you can remove the hub, which will usually have the brake rotor attached to it. Some machines will have a guard mounted on the knuckle behind the brake rotor. Remove the guard, this is easy to remove and is usually only held in place by a few bolts.

The upper and lower ball joints will be held on to the knuckle by nuts usually with cotter pins in them.

Remove the cotter pins and take the nuts off, you should be able to slip the ball joint out of the knuckle after that.

They sometimes take a little persuading, but usually come out pretty easily with a little hit from a hammer.

Do this for both the top and bottom ball joint connections to the knuckle.

To remove the tie rid ends, you will typically need two wrenches. Most of the time they are about one size apart, that’s helpful if you only have one of each size wrench.

You only need to remove the bottom shock absorber nut and bolt. You will need two wrenches for this part as well.

The shock absorber is held in by a bolt and nut set up connecting to the swing arm.

I found it easier to hold the bolt in place with a wrench and use an impact wrench to remove the nut.

Once the bolt and nut are removed, you should be able to move the shock absorber up and out of your way.

On some models of ATV or UTV, it will help make this whole job easier to do this step right after you’ve removed the wheel. You will notice a better range of motion in the whole shock and swing arm assembly after you remove the shock absorber.

It can give you easier access to the other parts you need to remove in the previous steps. I’ve just always done it this way and never had any issues, it depends on your machine and how you want to go about it.

After you’ve removed the shock absorber bolts and got it out of the way, you should be able to just pull the steering knuckle assembly off the axle. Sometimes it can be a bit stubborn and you’ll have wiggle it to get it started.

Now you’ll need to remove the seal and bearings from the steering knuckle. The seal will need to come out first.

They do make a special tool to make this easier like this Jecr Bearing and Seal Puller Tool from Amazon.

But I’ve got it done with just a screw driver before. Don’t get me wrong the seal puller tool makes the job a whole lot easier, and is useful for other projects as well. But you can get the seal out with a screw driver if your persistent enough.

To get the bearing out you’ll need a long center punch. Keep tapping around the bearing to keep it centered as you knock it out. You will most likely not be able to push the bearing clear through from one side of the knuckle to the other, so the bearings will need to removed from both sides separately from the inside out.

Once you’ve got the seal and bearing out of the knuckle, it’s a good idea to clean the knuckle of any dirt and debris that might make installing the new bearing more difficult.

As for the bearings you use, it’s up to you. There are plenty of options out there, just make sure you get the right ones to fit your machine. I like using the All Balls bearings and seals, I’ve had good luck with them in the past.

Here’s a link to an All Balls 25-1404 Wheel Bearing Kit on Amazon, the kit comes with the bearing and seals. That’s a good place to start looking for the bearings and seals to fit your quad.

Once you have the bearings you need to install them in the knuckle assembly just as they were when you took them out. There is a sprecial bearing press you can use to press the bearings back in.

The bearing seal will go back on the outside of the bearings after you’ve got them installed. They should seat nicely on the outer edge of the knuckle like they were when you removed the old ones.

Make sure you don’t forget the spacer between the bearings if your model has that.

Putting It All Back Together

That’s it, you’re done replacing the wheel hub bearings on your ATV or UTV, now it’s time to put it all back together. Everything will go back together the same way took it apart just follow the steps above in reverse.

How To Make The Bearings Last Longer

The wheel bearings on your ATV or UTV will just go bad over time. The best thing to do is make sure you’re installing the bearing seal the right way. Riding through mud and water is one the best parts about off-roading, so eventually water and dirt will get in there. But a good seal can help them last longer.

Most of these steps will be the same, except you will be dealing with the hub assembly to replace the bearings. Also, you will want to freeze the new bearings before replacing them in the hub.

Some models will have a snap ring clip holding the bearing in place. You can easily remove this though with a pair of snap ring pliers.

Use a heat gun to warm up the hub assembly where the new bearings need to go.

Take the new bearings out of the freezer and press them into the hub. You can use the old bearings or a large socket and hammer to help push the bearings in.

Put everything back together the same way you took them apart and you’re good to go. Remember to use all new cotter pins to keep things tightened down the way they’re supposed to be.