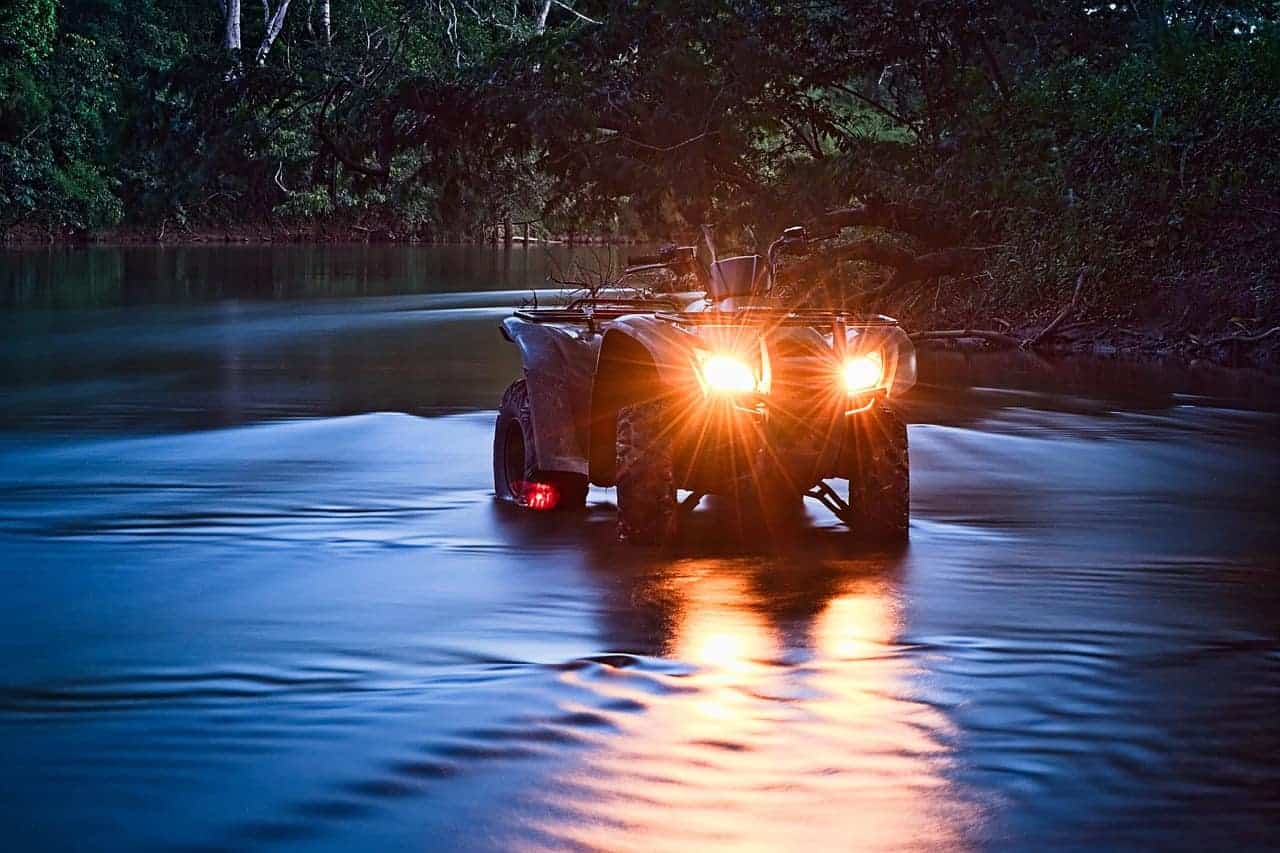 It happens all the time, water gets sucked into your engine or somehow makes its way into your gas tank. It makes sense with all the puddles, rivers, and streams you ride through out on the trail. Or maybe the gas tank was left open and it rained quite a bit.

However it happened, you need to remove the water from your fuel tank or engine before you try to start up the machine. It’s not a very hard process and if you follow the steps below, you will be able to start your engine without causing any damage.

They do make a Fuel System Water Remover found here on Amazon. But this is only really useful for small amounts of water and this will only remove water from your fuel system. To completely clean all water out of your machine, follow the steps below.

What Happens If I Start My ATV With Water In The Engine?

The most common results from running an ATV with water in the engine include, blown piston rings, blown valves, or a hole in the cylinder wall or head. You see the engine was made to compress an air/fuel mixture.

The air/fuel mixture will compress by the piston moving up, to the point where a spark will light it causing a small explosion which sends the piston back down. Water doesn’t compress. So if there is water in the combustion chamber when the piston is moving upwards trying to compress an air/fuel mixture. The pressure gets to be too much and the water will find its way out of the cylinder somehow.

Usually it will just blow a piston ring, but those aren’t fun to replace. In any matter, it’s best to remove the water from the engine and the fuel before trying to start the ATV. So lets get into the steps to do that.

Steps To Get Water Out Of An ATV Engine

If ever think you’re getting water in your ATV engine, like if you’re in really deep water or something. It’s best to shut the engine off immediately. As you can see in my picture in the sidebar, I’ve done this before. Thankfully I shut the engine off as I started to feel the ATV bog down and prevented any real damage from happening.

Luckily you shut the engine off before any real damage was done too, right. If so, follow these steps before trying to start your ATV again.

Wipe the air box out with paper towels or rags and let dry completely. If you can get your air filter to dry out, you might be able to use it again. Just make extra sure it’s completely dry inside and out.

Drain the fuel tank, fuel lines, and clean the carburetor if your engine has one. While you’re at it, drain the oil and remove the oil filter too. If any water got in your oil, it could cause some major problems for you later on.

I like to spray some carb cleaner in all the ins and outs of the carburetor just to make sure any water in there gets removed. It’s a good idea to let your gas tank air dry after you drained it as well.

Step 3: Force Water Out Of Cylinder

Refill the engine with oil, put on a new oil filter, and turn the engine over again, with the spark plugs still taken out. You’re going to want to look at the oil after you’ve let it sit for a few minutes. You’re trying to see if there is any water mixed in with the new oil you just added. If there is water you will see white colored milky areas rising to the top of the oil.

If you see water in there still, drain the oil and do those steps again. You really want to make sure there is very little or no milky white stuff in the oil.

Put the spark plugs back in, put some fresh fuel in the tank, and see if it’ll start up. After you let it run for a few minutes, check the oil again for water. If you don’t see any milky white liquid in the oil, you should be good to go. If you do see some, change the oil and filter again until you don’t see any water in the oil.

If it does not start up, you may have done some damage. You will probably want to check the piston rings, piston, and cylinder for damage. I sank an old Polaris Scrambler when I was younger, and water got into the engine. The piston rings were shot and needed to be replaced.

If you want some tips on how to get an ATV to run again by doing a tune-up check out my, ATV Won’t Start: Common Problems And How To Fix article.

How To Avoid Getting Water In An ATV Engine

With some of the terrain you ride through, it may be impossible to avoid water. But do try to avoid going too deep. Try to keep your exhaust and air filter above water at all times. Your air filter may be in an air intake box, if so, keep that above water also.

You could also try adding a snorkel kit to your ATV. Snorkel kits allow you to go into deeper water with your ATV without the worry of doing damage to your engine. To learn more about snorkel kits and how to make one yourself, check out my How To Snorkel An ATV article.