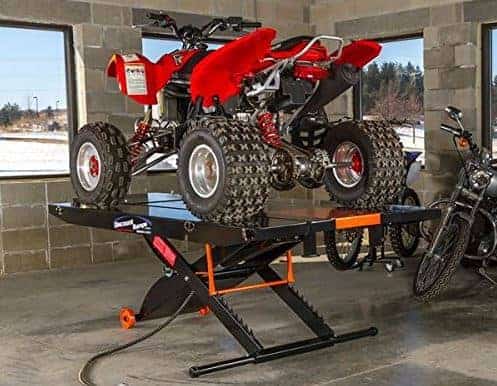 Any work you do on your ATV, beyond routine maintenance, will require you to lift the ATV. In this article I’ll show you the most useful and most common ways to jack up an ATV. Including where to place the jack, and some useful safety tips when lifting an ATV.

There are tons of reasons to lift an ATV and tons of ways to go about doing it. Use this as a guide to give you some ideas on how you could do it yourself. You don’t always need expensive equipment to lift an ATV either.

The best way to lift up an ATV is to use an ATV lift. They’re specifically designed to jack the ATV up for maintenance and it’s one of the safest ways to do it. Jack stands or blocks is another safe alternative.

Where To Jack Up An ATV

Of course you would want to lift the ATV on flat sturdy ground, but you also need to know where to position the jack on the ATV as to not damage the machine. This is mostly needed information if you plan on using a car jack, jack stands, or cement blocks. If you use an ATV jack or a scissor lift, the jack points are much less of a concern.

Lets start by telling you where to avoid lifting the ATV from. Definitely do not lift the ATV from the A-Arms, the rotors, the rear sprocket, or the bottom of the engine. Using any of those as ATV lift points could result in damaging the machine.

Try to get the jack or jack stand onto the frame, really anywhere on the frame itself will work but you also want the ATV to be securely balanced while up on the jacks. I like to use the frame right under the front bumper and the frame or axle near the rear tires.

Here are some pictures of different ATVs and their lift points to give you a better idea of where to jack up your ATV.

To make it easier, you could always run a 2×4 under the ATV and jack up the 2×4 from the sides of the machine. If you notice the bottoms of these quads near the centers all have some type of frame. Lay the 2×4 across the frame and jack up that way.

If your ATV is light enough, you could just lift the front and then the rear up onto cement blocks or jack stands, just be careful of these jack points and do not set the ATV onto parts that could be damaged.

If you don’t want to deal with ATV lift points or where to position the jack to lift an ATV, you could always get a scissor lift, an ATV jack, or use ramps.

These can get quite pricey but are by far the easiest and safest way to lift an ATV. They will also require a bit of space in your garage to own one. We’re talking around $1000 or more for a decent table lift.

If you’re looking for one of these, I recommend you check out this APlusLift MT1500 1,500LB Air Operated 24″ Width ATV Motorcycle Lift Table. They offer a 2 year warranty and have some of the highest ratings of any ATV scissor lift found online.

This is the most practical option in my opinion. Maybe that’s because I also have a motorcycle I use this lift to work on. But for around 100 bucks, this has been the best purchase for working on my machines.

I like the GoPlus Motorcycle ATV Hydraulic Scissor Lift Jack Stand on Amazon because it has wheels and a handle that allow you to roll it around and under the machine pretty easily. It’s also hydraulic so you don’t have to worry about needing an air compressor or any other special tools to use it.

I don’t like using ramps because if I ever need to get the ATV off the ground to work on it, I will most likely need to remove the wheels. When the quad is on ramps, you can’t do that. But they are nice to give you a little space when doing oil changes and things like that.

Here’s a link to the RhinoGear 11909ABMI RhinoRamps Vehicle Ramp from Amazon. These are actually made for cars and trucks, but will work for an ATV as well. I use these to give me some extra space when changing the oil in my truck, I hardly ever use them for the quad (I use the ATV Scissor Jack), but you definitely could if you wanted too.

If you’re going to be working on your ATV, check out the maintenance tools I use in the Recommended Gear Section of this site.