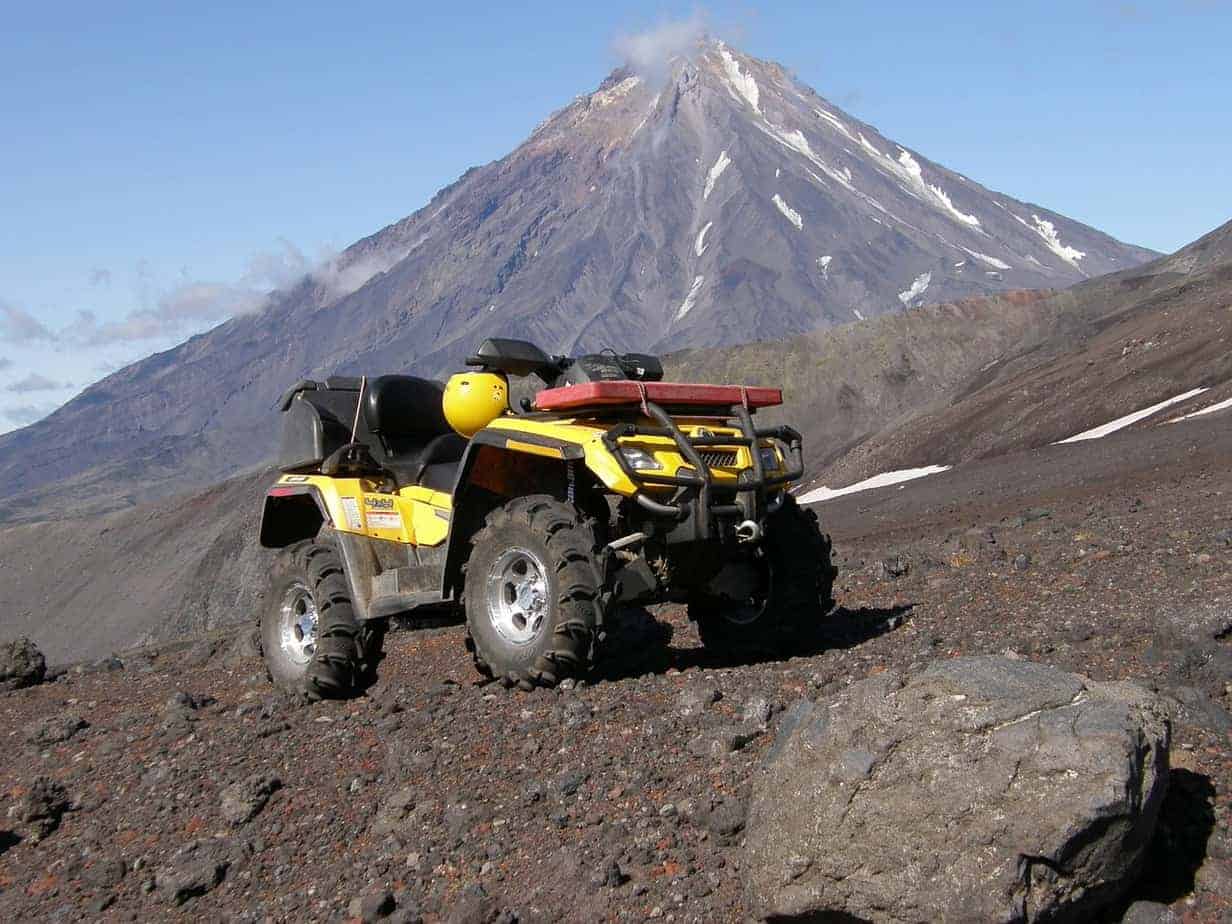 I’ve used the compression method I talk about below on my quad before, and it does work. I was a couple miles from camp and I shut my engine off to take in the scenery and walk around a bit. When got back on my quad to head back to camp, the dang thing wouldn’t start. I was able to get it started using the bump (compression) method, and I’m sure glad I knew how to do it rather than trying to push the quad all the way back.

Is It The Battery?

First thing is to make sure the battery is really the problem here. Your battery will slowly lose power over time if it has been sitting. The longer the ATV sits without the battery on a charger, the more likely it is that the battery could have died. You really should be hooking the battery up to a charger if it’s going to be sitting for 3 months or more.

If you try your push button start (or turn key start) and nothing happens, the battery may be dead. Make sure your run switch is turned on and your machine is in neutral. If you have a key, the key will need to be in the run position also. Try turning your headlights on if you have them. This can be deceiving because the battery might have enough power to run the headlights but not turn over the engine. But if they headlights (or any other lights) don’t turn on, you can be more certain the battery is dead.

If your engine turn over but very slowly, it may be the battery. The battery might have enough juice to turn the engine, but not fast enough to get it started. You would hear the motor spin a little but then slow down and stop. If you hear just a clicking sound, but the motor doesn’t turn or do anything, it could be the battery. There could also be a loose connection between your battery and starter. Check and tighten the connections to the battery terminals and to the starter.

Once you’re fairly certain it is the battery, you can try jump starting it. If you’re home and have a charger, there may be no need to jump start. Try just charging the battery first. The charger I use is a Ctek Smart Charger found here on Amazon. It’s sold at a good price (around $60-70) and has all the connections for any brand of battery your ATV has. I chose this battery charger because of its price, and how easy it is to use.

This method is commonly known as bump starting an ATV, or popping the clutch. You basically have to push the quad fast enough so that when you let the clutch out the engine turns over and starts. Most ATV’s are light enough to be pushed by a normal sized adult on flat ground. If you can get going downhill, it makes this a lot easier.

Here is a step by step of how to do it:

That’s it! You should hear the engine turn over when you do this. If you’re having a hard time you can try giving it some gas as it starts to turn over. The engine should fire up, when it does, pull the clutch back in. That will prevent the machine from taking off on you as soon as it’s running. It might take a few tries to get it done this way, but it does work.

If the tires skid instead of turning the engine over, try going into 3rd gear and repeating the steps. If the tires still skid, try on more solid terrain or somewhere where the tires have better grip. Once the engine is running, it should charge your battery back up.

If your ATV is an automatic, you won’t have a clutch, and may not have a way to select which gear you’re in. The bump start (compression start) method won’t work the same for you. I have seen people put the ATV into neutral, get it rolling, and drop it into drive to start the machine. But I think doing it this way could damage the transmission. I would only do it that way on an automatic as a last resort.

This is pretty straight forward, and is the same method you would use to jump start a car. You can use another ATV battery or even a car battery if that’s all you have. It’s a good idea to wear rubber soled shoes when you work on anything with electricity. The voltage’s and amperage’s of car and ATV batteries aren’t enough to cause serious damage, but it’s a good idea to be careful around the terminals to avoid damage to your vehicle or ATV.

Jump Start An ATV Battery From Another ATV

For this method all you need is a simple set of Jumper Cables like this one I found on Amazon, and another ATV. First, remove the seats to gain access to the battery. Some quads require that you also remove a battery cover. Connect the jumper cables to the good battery first, making sure the positive and negative of the other end of the cables aren’t touching. Then connect to the bad battery.

You should notice a plus sign or red flag on the battery indicating positive, and a minus sign or black flag indicating negative. Connect the negative (black) first, then the positive (red). You can hook the negative (black) end directly to the frame of the ATV, just make sure it is grounded. This can also help prevent a surge in the electrical system that could damage your machine.

Once you have both batteries connected with the jumper cables, you can start the ATV with the good battery. Let the ATV run for a few minutes. This charges your battery a little bit, and helps when you try to start it. Now you can try starting the other ATV. If it starts up, remove the red cable (positive) and then the black (negative), do this for both ATV’s.

You should leave the engine running for a while after a jump start. That will let the battery charge back up a little bit. If you immediately shut the ATV off, you will need to jump start it again. I’d let it run for a good half hour, I usually go ahead and ride it around for a little while, why not?

Jump Start An ATV Battery From A Car

The hook up for this method is the same as ATV vs ATV or car vs car using jumper cables. Hook to the good battery first, negative (black) then positive (red). The car battery and charging system is much stronger than an ATV battery, and could cause damage to the ATV’s electrical system if you turn on the car. This is because the alternator in your car charges batteries at a higher rate than your ATV battery can handle. For this reason, Do Not turn on the car at any time during this jump start. The car battery should have more than enough juice to start an ATV.

After you have the jumper cables hooked up, simply wait a minute, and try turning on the ATV. If it starts up, then you know the battery was the problem. Once the ATV is started, remove the cables from the ATV first, positive (red) then negative (black), and then from the car. I have done this with my truck, just to make sure it will work for you, and it works well.

Jump Start An ATV With A Battery Pack

This is one of the simplest most straight forward methods. But it’s more expensive because you need to have a battery pack in order to jump start the ATV. This method is similar to using jumper cables except instead of hooking your ATV to another ATV or a car, it’s hooked to a pre-charged battery pack. If you don’t want to carry an extra battery pack with you on your quad all the time, this method may not be for you.

The battery pack we use can also charge our smart phones and tablets, so it’s nice to have on a camping trip anyway. And if my four wheeler’s battery ever dies, it’s a super convenient way to get back riding again. The battery pack I use is called a Portable Jump Starter found here on Amazon. It has a built in flashlight and USB ports to charge phones or tablets, or anything that can charge through a USB port. All the cables and things you will need to hook up to your ATV battery are included.

If you have the extra money, or go camping a lot with your four wheeler. This is the best way to get your battery charged again without needing to pop the clutch, or needing another ATV or car nearby. You simply hook the included alligator clips to your battery, and then hook the cable to the battery pack. Once everything is connected, try to start the engine. The engine should start right up. You may have to wait a couple minutes to let the battery charge a little bit.

It’s always best to never need to jump start your ATV, but it happens sometimes. Taking care of your batteries and keeping them properly charged will save you a headache in the long run. To learn more about how to charge a battery and keep it charged while not in use, check out my How To Charge An ATV Battery article here.