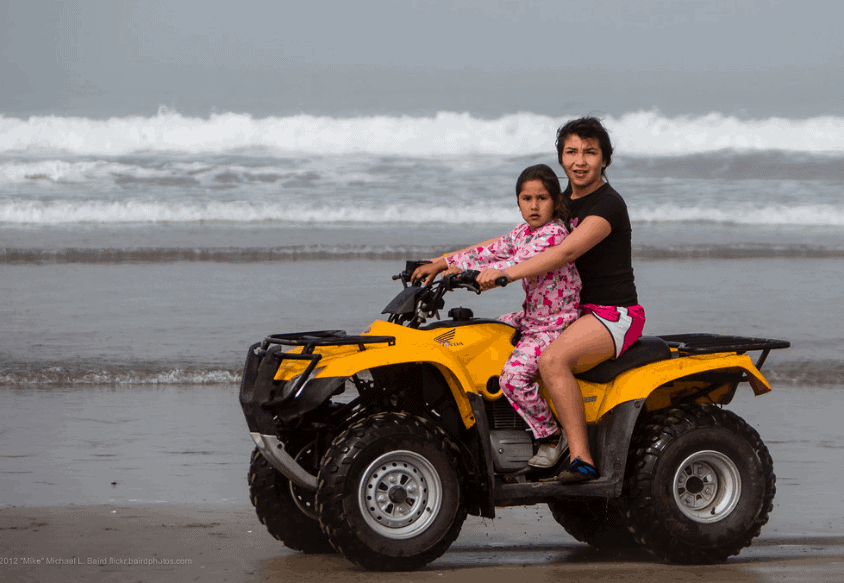 The best ATV for teenagers is one that looks mean enough and goes fast enough to keep up with their mates but has a raft of safety features to get them out of trouble at the first sign of danger.

Choosing the right ATV for a teenager comes with a host of problems: they don’t want to be seen buzzing around on a 50cc designed for little kids but the power of a thunderous 500cc might be enough to send them to the ER. As parents, we understand their need for speed but want to make sure they’ll be safe at the same time.

ATVs divide themselves pretty much into two categories:

Obviously, the sports models can be pretty powerful, but the utility versions have enough grunt to make them more agile than you might expect. Handling and maneuverability are also key features that you need to think about, especially for teenagers who don’t have the muscle to lug around anything too heavy.

Another thing to think about is whether you can afford to buy a new machine or if you will be searching through the market for a used model. It’s great to buy used if you want to save some dollars, but if you’re not sure what you’re looking for a new model gives you something more to trust.

You can usually test them out before buying, too, which means buying new gives you more choices. You really need to enlist the services of an experienced friend if you want to grab a bargain on the used market.

Of course, you can pick up some great used models from dealers which offer you the best of both worlds; advice and a guarantee on a model that will hold its price.

Check out this list of some of the most popular models for newbies to quad riding.

It’s been around a long time but still holds its own today. This Honda model looks and sounds like a mean machine. Its throaty roar gives the feeling of more power, enough to impress a teenager, but without the risk of a dangerously big engine.

It’s still fast enough to give them all the thrills and a ride that is still fun for newbies or more experienced riders alike. Shift change also gives all the feeling of a bigger model and starts beginners off the right way. Its gearbox is also pretty sympathetic and it doesn’t stall when it stops which lets youngsters learn to ride a shift without getting it right every time.

The price is pretty attractive, with new models coming in at less than $4,500. Depending on where you ride, though, you might find it a little too noisy for neighbors. As a sports model, it’s also not much use for carrying equipment around and it’s a little too small to carry a passenger which might take some of the fun away for a teenager who wants to share the thrills with a pal.

Things to worry about: not many safety features, very noisy

This quad could be pretty dangerous with its huge 500cc engine so you need to be careful not to overdo the speed before you know what you’re doing. It’s probably best for someone who has got to grips with the basics and wants to try going a little faster without having to worry too much about technical accuracy.

It has automatic transmission, meaning you can concentrate on your riding without worrying about changing gears. Its suspension is quite springy and gives a smooth ride over rough terrain.

At only $5,000, it is still a fairly economical model to start you off. Some riders criticize its performance at top speeds, saying it doesn’t handle as well. This might make it more appealing to parents who want to deter kids from going too fast!

Things to love: easy to ride, not too expensive, smooth

Even the name sounds powerful, and this is really aimed at adults so teenagers need to be a little cautious. However, the engine is not too big at 271cc and the automatic transmission means it’s very easy to ride.

The difference between this and the Polaris is the braking system: Kawasaki uses front and rear brakes separately which can be hard to get used to. If you’re looking for a model that will build your skills for the future, this is it.

Knowing the brakes need thinking about might also deter youngsters from going too fast in the first place. It’s a two-wheel drive, so not really for use in deep mud but it’s a very smooth and stable ride that can build riders’ confidence.

A good starter for someone to become a great rider, but not as easy to just get on and go like the Polaris.

Things to worry about: brakes need getting used to, only 2WD

While some models come with safety features fitted as standard, it is really up to the rider to keep themselves safe by using a little common sense. Quads can make riders feel more sturdy than a dirt bike, but that is really a false sense of security as the risks are about the same.

Bigger side-by-sides might offer rollbars or even seatbelts, but even this is no real protection when going too fast. Even a 250 engine can quickly reach speeds of up to 65mph, so it is pretty important you can trust your teenager to take it slowly at first until they build up their skills. If you can’t count on them to do this, you might be better off looking for a smaller engine or an electric quad suitable for kids. They won’t love you for it, but at least they’ll be around for you to love.

Wearing the right safety gear can also mean the difference between biting the dust and walking away or getting to the ER in the back of an ambulance. Most teenagers are quite happy to wear an expensive trail kit as it looks good and goes with the image. Use this to your advantage and make sure they wear their padding and strong boots every time they ride.

A helmet is obvious, but don’t be fooled into buying second hand. To be effective, your helmet needs to meet up to date guidelines and should be replaced every time it takes a hit, even if there is no visible damage. Goggles and gloves are also pretty essential.

To see some of my top rated safety gear, check out the Recommended Section of this site.

Make no bones about it, quad riding will always be dangerous. Choosing the right model and having the right safety equipment from the off is crucial. Get into good habits and build the right skills at the beginning and you can look forward to a long, thrilling journey on the trails.