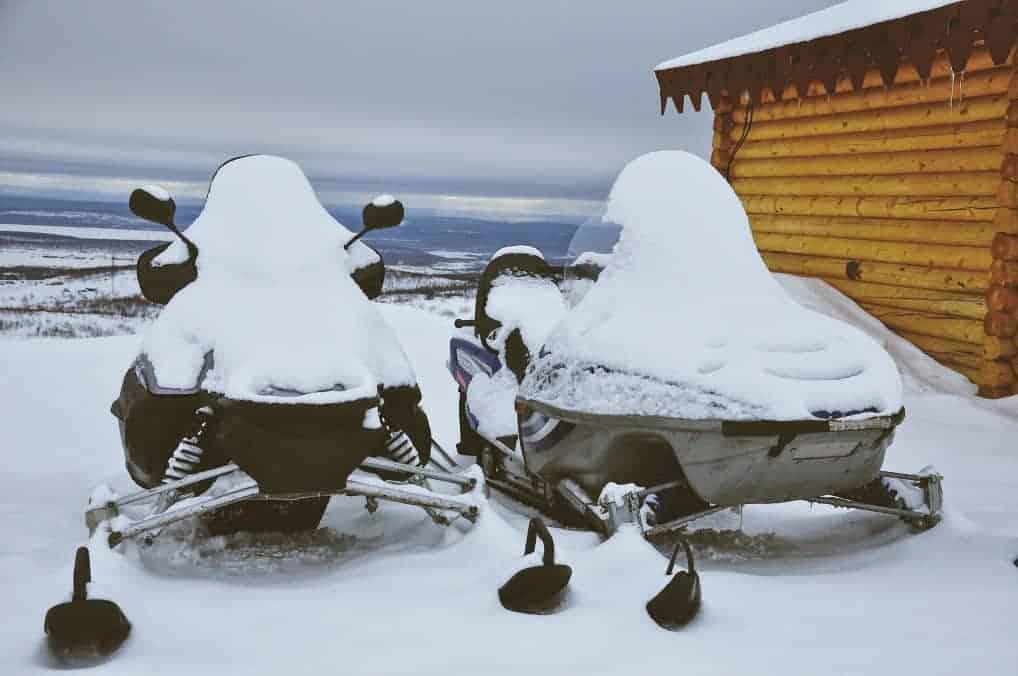 If you’re looking to buy new skis for your snowmobile, some of the following questions might have popped up at one point – are all the skis the same? Do they fit on every snowmobile universally? Or should you be careful when choosing the right ones?

Most snowmobile skis are universal and can be interchanged between other snowmobiles with the same mounting hardware. Some snowmobiles will only accept a certain ski or will need adapters or other hardware to make the skis fit.

Even though there are guides for buying skis for your snowmobile, it can be a difficult task to choose the right ones. This is where our article comes in, because it will help you get your snowmobile right back on track, with the best possible skis for it.

Not all skis are universal, but a fair amount of them are. There are a lot of snowmobile manufacturers, such as Ski-Doo, Polaris, Yamaha, Arctic Cat, and some other smaller ones. All of these manufactures make their own stock skis. These skis can also be universal, but it’s not common.

Not only that, but OEM skis are usually made for a wide variety of drivers – mostly beginners – while aftermarket skis tend to be of high performance and for all types of riders.

Try places like LionParts or DennisKirk to find aftermarket skis and mounting hardware if needed.

When thinking about buying new skis, you have to decide what kind of riding you want to do. Why? Well, skis for harder trails may not work that well in the deep snow or on a hill.

Here’s a table showing the average dimensions of skis you’ll find for different types of snowmobiling.

There are four large American manufacturers (Arctic Cat, Ski-Doo, Polaris, and Yamaha) that control almost the whole snowmobile market between themselves. Other than them, there are some specialized manufacturers like the Quebec-based AD Boivin and the European Alpina.

So you may be wondering, are snowmobile skis interchangeable between those major brands?

Snowmobile skis can be interchangeable between brands if you use adequate ski mounts. There are multiple mounts available, the one you need will depend on the brand and which type of skis you’re trying to use.

But, if you want to do that, you’re going to have some new issues because there are a lot of ski mounts as well as a lot of skis.

If you get skis from some other major brand, and you want to install them on your snowmobile, you will have to check with the manufacturer which mount you need for it.

In case your stock skis are damaged and require changing, or you would just like a pair for more advanced users, you’ll want to change your OEM skis for an aftermarket product.

Your original skis are usually made for the average rider, and while that may be enough for you at the start, it probably won’t be after some time.

Here is where aftermarket skis come in. Those skis are usually made for:

But there are so many brands and so many models, so how to choose the best ones?. Well, don’t panic – we got you covered.

And now we are getting to the best skis these aftermarket brands have to offer. We have tried many of them, and in our experience, these are the best aftermarket skis you can currently get on the market.

I like to use LionParts when looking for Snowmobile or ATV parts, but you can find a lot of these on Amazon as well.

Syldog’s Trail Ski is more durable then an OEM ski and it will last you for years.

It has a unique keel design, with a height of an inch, which means it is not too aggressive for your everyday ride, and also it has a reverse keel which will make its own footprint through the snow minimizing darting and maximizing control over your machine.

Another key feature you will notice is a channel in the middle of the ski back, which gives you a little bit of a floatation.

Camoplast makes a unique ski in the industry, one of the few blow-molded one-piece performance skis.

These skis are very lightweight, easy to install, while still very solid and durable, and offering great steering control.

They are great skis to choose for the price.

C&A Pro Razor XPT are great and lightweight trail skis that work on almost all of the latest generation snowmobiles. If you have a snowmobile model from 2011 or older, then you can take RZ skis, which are great as well, and are specifically made for older models (even though they work on new models as well, but they are more aggressive because of the styles of new sleds).

XPT are made for newer sleds (2012 and newer) with a lot more pressure on skis because newer snowmobiles have that rider forward focus design. They are a bit less aggressive, unlike the older RZ.

We have one more trail skis on our list. Curve XS skis work great on icy trail conditions you can see in the late season, and they steer you where you want to go, with great control, turning ability, and precise handling.

Their design has an injection profile, where snow comes out, which provides you with less resistance, while it also fans snow in front of your engine, cooling it in the process.

They are universal skis that you can mount on any snowmobile.

Kimpex Rush Skis are very lightweight and stable, while at the same time efficient in all conditions. They have a unique design that reduces steering effort and swaying.

They are very versatile and can be equipped with different carbide runners that improve performance, and are compatible with some OEM runners.

And we can’t forget, they are pretty affordable, while also sold in complete Kit, which includes skis, handles, runners and adapters.

We chose to analyze the Raider Black Skis (link to Amazon) last. Namely, the company is one of the rare examples that make blow-molded one-piece snowmobile skis.

Raider Black skis will provide you with enhanced handling, which means you will be in for a safe and smooth ride.

They are extremely lightweight, great for all terrains, but if you are looking for an aggressive ride, you should maybe look elsewhere.

As you could’ve seen, changing your snowmobile skis can be a difficult task. If you’re going with the same manufacturer, then you won’t have problems, because these skis are indeed interchangeable.

As for other models, you might have some trouble, but that’s where aftermarket skis come in. Aftermarket skis are a good solution if you want something new and something more advanced, so don’t hesitate to get them. That’s all for now. See you next time!