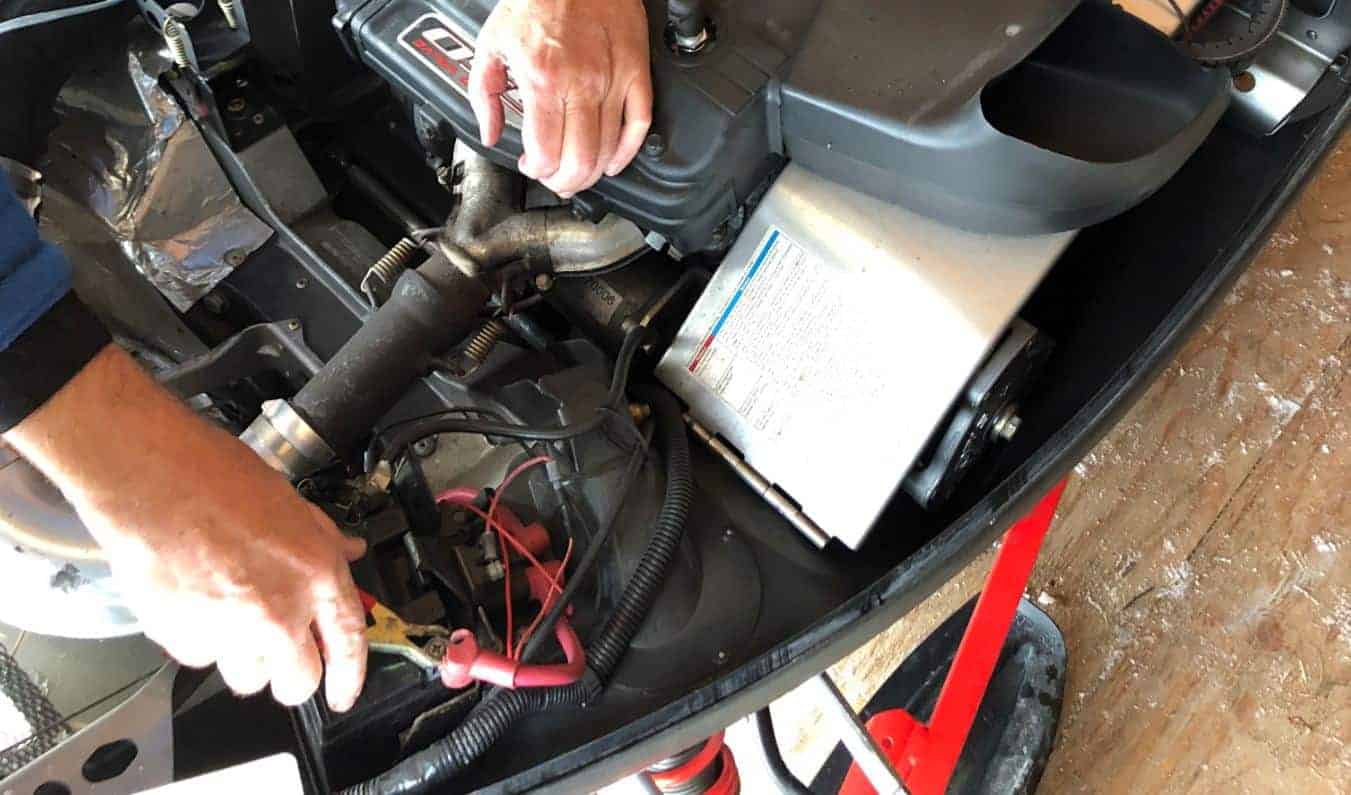 Like all vehicles, snowmobiles also need the energy to run. In snowmobiles, the source of that energy are batteries, that power the vehicle. In today’s article, we are going to talk about snowmobile batteries and how they function.

Snowmobiles will use 12 volt batteries and are charged at 12 volts, with the optimal charge being 12.8 volts. If your charge falls below 12.2 volts, you probably have some issues with the battery. You can not use 6 volt batteries to run a snowmobile properly.

In this article, we are going to give you an insight into how snowmobile batteries work, what types there are, and how you should maintain them. We are also going to tell you whether your snowmobile can run without a battery, so keep reading to find out more.

What Kind of Battery Does A Snowmobile Use?

When it comes to snowmobiles, these vehicles usually use two types of batteries:

When installing a new battery, you have to be sure its fully charged, since non-charged batteries can damage the electronics of your snowmobile and will not last as long as they should.

So what is the difference between these two types?

The dry shipped absorbed glass mat (AGM) is present in those snowmobiles that have a factory-installed electric start. They have to be kept dry and cleaned. They are relatively easy to maintain and charge, especially newer models.

On the other hand, low maintenance batteries are generally used as replacement batteries. They should also not be exposed to water or electrolytes and are relatively easy to maintain.

Between these two, you should always favor a regular AGM battery instead of a low maintenance one.

Snowmobile batteries are always charged at 12 volts. The nominal charge is set at 12.8 volts, but the battery can go as low as 12.3 volts and still operate normally.

If the charge falls down to 12.5 volts, you should monitor your battery and charge it at least a bit, but if it falls under 12.3 volts, you shouldn’t even try to start your machine, as it could cause damage.

Charge your battery immediately; if that doesn’t work (if it won’t go above 12.3 volts) it’s time to replace your battery.

I like the CTEK 12V Automatic Charger (link to Amazon) to charge the battery, but to also keep it plugged in when not in use. the great thing about the Ctek is that you hook the battery up, and it will charge it as well as keep it topped off, all completely automatic for you.

Snowmobile batteries are seasonal batteries and you can easily maintain them by keeping them on a charger when they won’t be in use for anything over a couple weeks.

Depending on the type, batteries can last from two to three years, or three to five years.

There is, of course, no general rule and the lifespan of your battery will depend a lot on how often you maintain it.

Here’s a good video from Polaris about snowmobile battery maintenance:

Regarding the replacement of a battery, you’ll know you have to do something if your snowmobile won’t start at all.

Once you’re done with charging your battery, be sure to check it with a voltmeter to see if its charge is below 12.3 volts.

If it is, then your battery is not just empty, it’s completely dead and you definitely need to buy a new one. If you don’t want to wait, most automobile shops have a quick test you can use.

Can You Run A Snowmobile Without A Battery?

Snowmobiles run on batteries, but can they run without one?

Here, we are going to explain the mechanics of running a snowmobile without a battery.

What does that have to do with running a snowmobile without a battery? Well, that same regenerative power that powers the battery while the engine is running is the energy that will make your snowmobile run even with a dead battery.

But, since your battery is dead, you have to find another source of ignition.

You can use a Jump Box (link to Amazon) and connect it to the engine (positive first, then negative) and then start it like that, which is actually a relatively easy method; you only have to connect the cables and start your snowmobile.

You will have to unhook it before closing the lid and rely on the power of the alternator; this is really a short term solution and doesn’t provide power for a long period, so you risk your snowmobile shutting down at any given moment.

You may only get a couple miles out of it before the engine shuts down again.

The effects of running your snowmobile without a battery may be grave. If you only do it as a last resort for a short time to reach your destination and then replace your dead battery, then you probably won’t experience any major issues.

In such cases, what could’ve been a simple $50 problem could turn into a $500 or $1,000 major issue, so avoid running your snowmobile without a battery if you can.

What Is The Best Snowmobile Battery?

If You’ve reached that phase where your battery is truly dead, you’ll probably be looking for a new one. Like usual, we have you covered with some of the best models out there:

The Yuasa Battery (link to Amazon) comes dry, but you’ll get the acid bottle inside your package. It is made in such a way that it is easy to fill it up, and with almost no way for you to hurt yourself while doing it.

It’s top is spill-proof, so acid can’t spill all over. You don’t have to add any water to it, but you do have to charge it from time to time. Unfortunately, you don’t get bolts and nuts with it, but it is a high-performance battery and maintenance-free.

This is a pre-filled Weize Battery (link to Amazon) and it is completely ready to use. What’s even better is that it has a heavy and durable container made to resist any type of shocks and vibrations, which makes it a completely safe and secure battery unit.

It can very easily be mounted in any position without the fear of spilling acid. It is a rechargeable battery with a high discharge rate, deep discharge recovery, wide operating temperatures, long service life, low self-discharge, and shock and vibration resistance.

This is a great high-performance, maintenance-free, and sealed Motorcycle Battery (link to Amazon) for people on a budget. It has a LED digital display screen that reads the battery alternator voltage and warns you if the voltage is low.

They come fully charged, you just have to connect them to your snowmobile and you are ready to go.

And that’s it for today. We’ve shown you how snowmobile batteries work.

In the beginning, you saw what types are common. Then we talked about the charge of such batteries, as well as their usual lifespan and their maintenance.

You’ve seen that 12.3 volts is the minimum charge of a functional battery and that you should maintain your battery regularly and not just during the season.

Finally, we’ve talked about the process of running your snowmobile without a battery, telling you how it’s done, how you can do it, and why you should avoid it if you can. The potential damage is just not worth it.